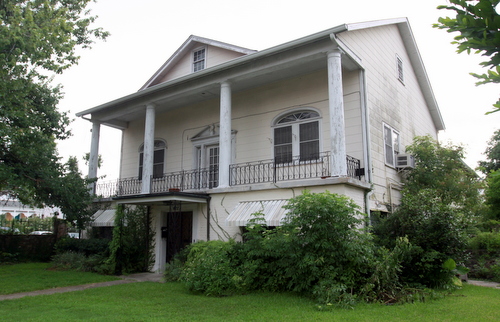 The rectory at St. Henry’s church that neighbors once feared would be demolished for a parking lot will receive a new lease on life as classrooms for Ecole Bilingue, according to a plan school leaders shared with the neighborhood Monday evening.

The purpose of the renovations, said Ecole Bilingue principal Pauline Dides, is to create more room for the elementary school functions currently crammed into the main building at 821 General Pershing. There will be a handful of new classrooms, but also a teacher’s lounge, offices, an arts center, a library and a science lab — much of which is currently partitioned off of the main building’s cafeteria.

“The object is just to have more room for everyone,” Dides said.

The renovation will restore the exterior of the rectory without altering it, Dides said. The building comes with the added benefit of the yard around it, as the school’s main building lacks much green space, making the gardening programs for the students a challenge, Dides said.

As part of the renovation, the parking lot at the corner of General Pershing and Constance will also be redesigned, Dides said. Traffic flow will be improved, and the number of spaces will increase from 33 to 38.

Under the rectory’s current zoning, the school will require a conditional use by the New Orleans City Council. Once that is obtained, school leaders hope to begin construction in the spring and open the renovated building in August 2015, Dides said.

The rectory remains owned by St. Henry’s church, and was the subject of neighborhood controversy in 2011 when archdiocese officials briefly considered demolishing it to expand the parking area, in case St. Henry’s became used for an exhibit hall. St. Henry’s reopened for weekly Mass in 2012, however, and the rectory has been used for storage space for the school since then, said Ecole Bilingue board president Andrew Lapeyre.

The school has actually been a tenant of the building for years, but environmental problems prevented the rectory from being used for classrooms in the past, officials have said. The school is now being tested for asbestos and lead paint, Dides said, and any problems will be fully remediated as part of the renovation.

The project won’t have any effect on the school’s annual Fete Francaise fundraiser, school officials noted, bringing laughter from the small audience.

The blue dots
Monday night’s meeting was held as part of the city’s Neighborhood Participation Program, but drew only a few neighbors — none of whom expressed any opposition to the use of the rectory by the school. In fact, conversation quickly turned to an altogether different topic — the blue-and-white dots painted on General Pershing Street outside the school.

“It just looks like a sea of blue dots that I don’t want to look at,” said Constance Street resident Donna Rice, who stressed that she otherwise supports the school’s plans. “It’s really intrusive. It’s not a good thing.”

Dides said the school had sought to have four-way stop signs installed at the corner of General Pershing and Constance to slow down high-speed traffic along Constance, but a traffic study by the city determined that the number of vehicles passing was too low to justify it. As they surveyed other ways of possibly slowing traffic, they turned to the dots, Dides said, as their only option.

“There’s not a lot of traffic, but the traffic goes really fast,” Dides said.

Bob Smith, co-leader of the Faubourg Marengo Neighborhood Association, suggested that if the school tries to revisit the stop-sign request, the neighborhood would be happy to support it.

“Constance Street is a race from one stop sign to another,” Smith said.

General Pershing is on the city’s list of streets to be resurfaced, Dides said, and that may be a better time to discuss the traffic issues with the city. 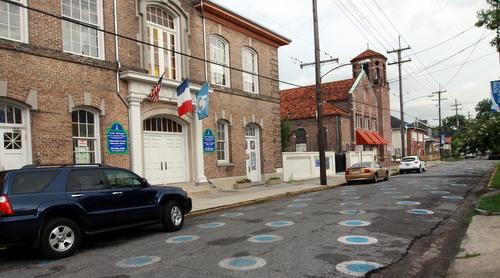 One thought on “Ecole Bilingue to renovate former St. Henry’s rectory for classrooms”