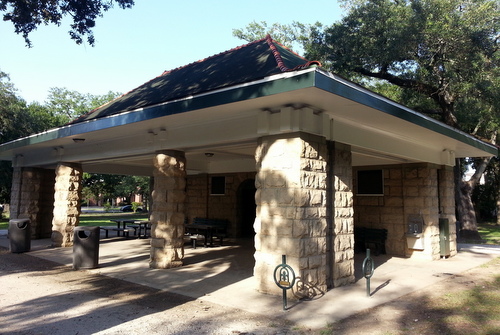 Audubon Park’s Shelter 11, near St. Charles Avenue, was recently renovated with private donations, and the park is asking the city to pay for similar renovations to the bathroom complexes on The Fly. (Robert Morris, UptownMessenger.com)

The city of New Orleans’ $12.5 million plan to repave the uppermost end of Magazine Street next year answers a major standing request from the Audubon Commission, but Audubon leaders are still requesting an additional $3.6 million in upgrades to the riverfront park known as “The Fly.”

The city has begun its annual review of five-year budget requests from city agencies, and the Audubon Commission returned Monday afternoon with a very similar set of goals to those it presented last year: improvements to the Riverview park and to Magazine Street through the park.

Magazine Street upgrades
Last year, the commission’s desire to see a smoother, safer Magazine Street with more crosswalks was its most expensive request, totaling $5.1 million for an array of improvements. Since that time, however, the city has independently scheduled Magazine Street for a total resurfacing to begin next year in two phases, Mayor Mitch Landrieu’s office confirmed Monday afternoon.

Audubon has been warned that Magazine Street may become one-way during the project, which will complicate the entrance to the zoo, but will ultimately be worth the difficulty, said Larry Rivarde, the executive vice president and managing director of the Audubon Nature Institute.

“We look forward to the inconvenience, because it needs to happen,” Rivarde said.

Because of those plans, the Audubon Commission is reducing its own request for improvements along Magazine Street to $1.5 million, Rivarde said. The park, for example, had hoped for brick crosswalks, as a sort of gentle traffic calming measure — and while the city’s repaving plans do not include bricks, the Audubon Commission is requesting money to add them afterward, Rivarde said.

Audubon would also like additional landscaping around Magazine, to make it more clear to motorists that they are traversing a road through a park — and have envisioned an archway over Magazine welcoming drivers.

Improvements at The Fly
Meanwhile, Audubon received no money last year for its $3.6 million request for improvements to the Riverview, so the commission is asking for the same project to be included in the budget for the coming years. Included in that request is repaving the loop road that runs around Audubon Zoo along the Riverview Park, adding a bike lane and clarifying the parking, Rivarde said.

By comparison, Rivarde said, the U.S. Army Corps of Engineers reworked a parking lot on the road near the train tracks that shows how nice the road could look, and how far it is from that standard.

“They did a beautiful job, right before the train tracks. It makes the rest of the Riverview look really bad now,” Rivarde said. “It needs a major overhaul.”

Other projects at The Fly would be improvements to the restrooms — bringing them to resemble Shelter 11 near St. Charles Avenue, which was renovated with private donations — plus new benches, lighting and sidewalks. Rivarde said he does not have any current estimates for many people visit the Riverview annually, but there is no doubt that it’s popularity is growing, especially in the spring.

“It’s where everybody goes to eat crawfish,” Rivarde said. “Obviously, it’s well used, and it’s in dire need of some upgrades.”

The commission has $400,000 that was previously allocated for work at the Riverview about 10 years ago, but Rivarde said that money would only cover limited repairs to the road.

Drainage in Audubon Park
In addition to sprucing up Magazine Street and The Fly, the Audubon Commission added a third, new request this year: $1.5 million in drainage improvements inside the park. The roadwork should help improve drainage lines somewhat along Magazine Street, Rivarde said, but flooding can pose a serious problem in the interior of the park, especially along the former Exposition Boulevard that runs along the downtown side of the park.

“We’ve got a huge issue with drainage in Audubon Park,” Rivarde said.

Officials from the City Planning Commission questioned whether drainage work should fall to the Audubon Commission, rather than to the Sewerage and Water Board or other city agency. And whoever does the work, it should rely on newer stormwater-management techniques, rather than just draining it through new pipes, the officials said.

“Managing the water shouldn’t be that difficult,” said Dale Thayer of the City Planning Commission. “There’s absolutely no reason that any drop of water that hits this park should go into the city’s storm drain. If anything, it should be a release valve for the adjacent properties to go into the park with the stormwater.”

The $1.5 million was just a rough estimate to serve as a placeholder, Rivarde said. The commission has already begun an engineering study that should determine what work is needed, Rivarde said, and which agency it should fall to.

All three of the commission’s requests — the $3.6 million for The Fly, the $1.5 million for Magazine Street and the $1.5 million for drainage — will be evaluated by the City Planning Commission, which will then make recommendations to the city council for how much to include for each project in the next five years’ budgets. Last year, the recommendation was for no money for any of the commission’s requests, although the solution for the Magazine Street resurfacing was found in a different part of the city budget.

In March, two-thirds of New Orleans voters rejected a proposal to consolidate and extend the property taxes supporting the Audubon Nature Institute. It is possible, Rivarde said Monday, that money from that proposal could have helped pay for the Magazine Street and Riverview upgrades had the initiative passed.

7 thoughts on “Magazine Street scheduled for repaving in 2015; Audubon Commission seeks improvements to “the Fly””