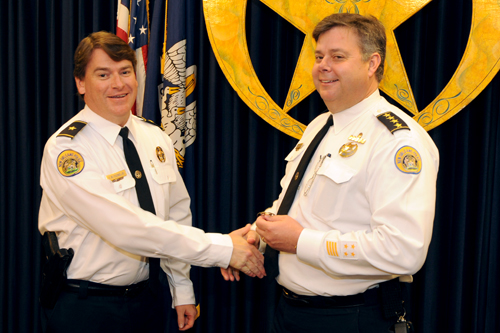 The lieutenant who has led the investigations into a number of major Uptown crimes over the past two years was promoted Friday morning to take charge of the citywide anti-gang investigations, New Orleans police said.

NOPD Commander Frank Young will lead the Specialized Investigations Unit, which includes the Multi-Agency Gang Unit and the department’s internal gang unit, announced NOPD Superintendent Ronal Serpas on Friday morning. The Multi-Agency Gang Unit has been responsible for the major state and federal racketeering indictments of 15 to 20 defendants at a time, which city leaders have credited in part for reducing the number of murders in New Orleans by taking the most dangerous offenders off the streets.

Most of Young’s career has been spent as a detective involved in the complex investigations with other jurisdictions that the Specialized Investigations Unit handles, Serpas said, and the leadership skills he honed in the Sixth District will translate to his new assignment.

“I think he’s done a great job, and he’s prepared himself for this next challenge,” Serpas said following a short ceremony at the department’s weekly Comstat meeting. 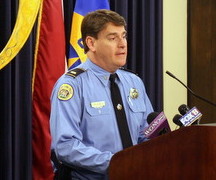 In the Sixth District — which covers the area of Uptown downriver from Napoleon Avenue, including the Garden District and Central City — Young has supervised all investigations into non-fatal violent crimes and property crimes since early 2012. That year, his detectives made several looting arrests during Hurricane Isaac that subsequently led to major convictions. He also led the five-month investigation into the Camp Street carjacking and shooting of attorney Sandy Kaynor, and the Sixth District saw a 12-percent decrease in armed robberies and 9-percent decrease in violent crime overall in 2013.

Young has also been a frequent presence at neighborhood meetings around the Sixth District, and his participation in taming unruly crowds of teenagers on Amelia Stret during Mardi Gras drew praise from residents. Many of the city’s major gang indictments thus far have also been in the Central City area and relied on groundwork laid by Sixth District investigations, Serpas noted.

NOPD Sixth District Commander Bob Bardy has been interviewing candidates to fill Young’s position, and that decision will be left to him, NOPD Deputy Superintendent Darryl Albert said Friday.

Young’s promotion was made possible by the retirement of Commander Edwin Hosli, who will be taking a job at the Orleans Parish Sheriff’s Office. Hosli, a friend of Serpas since their teenage years, had been suspended in 2011 amid an investigation into a private company he founded to handle red-light camera tickets and was fully reinstated in 2013 after investigators declined charges.

“It’s been a wonderful ride,” Hosli said. “There’s been some ups and downs, but it’s been good. … The department’s been good to me and to my family.”

After his reinstatement, Hosli had previously led the Management and Services Bureau, which handles departmental records, fleet maintenance and other logistical duties. That job will be taken over by Commander Henry Dean, who had led Specialized Investigations prior to Young’s promotion.