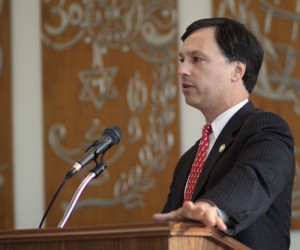 Two environmental activists called for state Rep. Neil Abramson to recuse himself from bills that would affect the wetlands-loss lawsuits against the oil and gas industry because his law firm represents one of the companies being sued, but Abramson defended his conduct with regard to the bills and said it has been ethical and without bias.

Anne Rolfes of the Louisiana Bucket Brigade and Jonathan Henderson of the Gulf Restoration Network — two participants in a panel discussion called “Lawyers, Floods and Money: Understanding the Oil and Gas Lawsuits” hosted Thursday night by the New Orleans chapter of The Roosevelt Institute progressive policy think tank — singled out Abramson in their comments toward the end of the discussion.

Rolfes said that the law firm Abramson works for, Liskow & Lewis, represents one of the 97 oil companies being sued by the Southeast Louisiana Flood Protection Authority – East. Around a dozen or so different bills pending in the Louisiana legislature would kill the lawsuit by stripping the flood authority of its ability to file suit over wetlands issues, and Rolfes said Abramson should follow the lead of Sen. Eric LaFleur, another attorney who recused himself from voting on a bill because his firm is involved in an issue related to it.

“Anyone in Neil Abramson’s district, please reach out to him and ask him to recuse himself from any and all of these bills that come before him,” Rolfes said to the crowd of several dozen people at the Propeller incubator in Broadmoor. “He is a shareholder in a law firm that is making money from the oil industry. It’s really corruption right next door.”

Henderson followed up Rolfe’s comments by noting that Senate Bill 469 — already approved in the House — is likely to go before the Civil Law committee that Abramson chairs next week.

“We need you to call his office,” Henderson said. “It’s going to go to his committee that he chairs next week. We need to kill it in that committee. We can’t let it get to the floor.”

Abramson defended his conduct when reached by Uptown Messenger after the panel Thursday, noting that his conduct in the legislature on Thursday regarding a different oil-lawsuit bill, Senate Bill 667, demonstrates his objectivity and expertise on the issues. The Times-Picayune reported that Abramson added language closing “a loophole that would allow oil and gas companies to avoid paying for damages that have been covered by state property laws since the early 1800s.”

Rolfe’s public demands for recusal amount to an “irresponsible media stunt,” Abramson said, one that frustrates him because she has never met with him to discuss his positions on the wetlands-lawsuit issues.

“I completely understand my legal obligations as a legislator, and I always uphold our state’s ethics laws,” Abramson wrote. “I am confident that I do not have any conflict of interest that would prevent me from voting on this measure. Therefore, because I have an obligation to do my job, I will vote on this measure.”

Jeff Adelson, who has covered the lawsuits for The New Orleans Advocate and served as the third panelist in Thursday’s discussion, did not address Abramson’s involvement. Generally, he said, the bills targeting the lawsuit have passed the Senate easily and can expect Gov. Jindal’s signature, if they can pass the House before the legislative session ends.

“None of the bills that have moved passed the Senate so far have had much of a problem moving through the Senate,” Adelson said. “The sentiment of the House also seems to be toward supporting these bills, although it’s on a much closer vote. I think you can expect some pretty serious fighting in the House over these bills.”

See above below for live coverage of the panel.