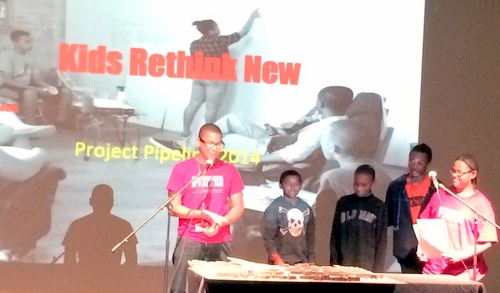 Students present their plans at the Contemporary Arts Center. (photo by jewel bush for UptownMessenger.com)

With the unleashing of their imaginations and mentorship from the National Organization of Minority Architects, four teams from Kids Rethink New Orleans Schools, Sci Academy and Urban League College Track spent the last year analyzing the needs of various neighborhoods around the city and then developing architectural plans designed to meet those needs.

Security, transportation, employment, shelter and food were among areas the youth considered during the urban planning process. They sought to define space and place and answer questions like: Does a church fall under the category of public space, entertainment or education?

And what the budding architects, ranging in ages 11 to 18, envisioned is nothing short of thoughtful, innovative and really, really sweet.

We’re talking about blueprints that seek to put restorative justice centers in schools, solar panels on library roofs, grocery stores that include nail shops and community kitchens in food deserts and schools in “education deserts,” a term used by a member of the Rethink architecture committee.

The designs, architectural models done to scale including Cheerios box buildings, were unveiled at the Project Pipeline showcase Monday night in the Freeport-McMoRan Theater at the Contemporary Arts Center. It was apparent during the presentations that tackling social justice through the lens of architecture is a main component of the program. A common thread among the groups was the call to attack blight and give empty lots “purpose,” as said by a member of the Sci Academy Gert Town Site team.

That same student, a dapper fellow wearing glasses and a yellow-striped tie, spoke about the importance of bringing educational outlets to neighborhoods as a means to provide positive activities to help the youth (and their families). “This way the kids won’t wander the streets and get into trouble,” he said.

Bryan C. Lee Jr., president-elect and program director of the Louisiana branch of NOMA, said, “Although the workshops are about bringing more students into the design profession, we are equally interested in creating students who are socially conscious users of the built environment. Whether a student ultimately becomes a doctor, lawyer, or chef, they will have agency in the spaces they inherit or potentially build. Having a sense of community obligation creates better space for all of us.”

Since 2006, nationwide, Project Pipeline has held camps in 11 cities and taught more than 1,000 students. Here, Project Pipeline has been around for nearly three years. A few of this cycle’s participants attended the design summer camp in the past and have taken to the field so much that the graduating seniors are majoring in architecture in college.

When Lee handed one participant her “designer-in-training” certificate of completion, he asked, “After you graduate are you coming back to mentor?”

Without hesitation, she said, “Of course.”

This fall, she will study architecture at Davidson College in North Carolina.

Women make up about 22 percent of architecture staff in the United States, according to the American Institute of Architects.

In Louisiana, there were only 16 black licensed architects in 2009, and I don’t believe the figure has substantially increased since then. With such low numbers in the field, programs like Project Pipeline are essential in exposing youth of color to architecture as a real career option. The role of mentor is exceptionally crucial. Not only does Project Pipeline introduce professional architects to students, it allows for peer mentorship. High schools students see college students studying at the university level. Middle schoolers interact with high schoolers already invested in learning more about architectonics. Ultimately, those interested get to see what a path to pursing architecture looks like from all angles.

“NOMA Louisiana is here for Louisiana communities as an advocate for conscientious use of public spaces and to speak to social justice in the built environment at large,” Lee said.

The promise of youthful vigor is ever refreshing and was ever present among the Project Pipeline preteens and teenagers who are conceptualizing their environments, masterminding intergenerational ways to improve their communities and dreaming big. This is a side I wish more people would get to see of our local youth.

Participants in the program after their presentations. (photo by jewel bush for UptownMessenger.com)