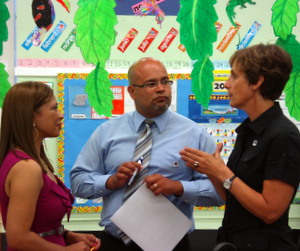 Principal Melanie Tennyson speaks to other International School administrators in May of 2011. (UptownMessenger.com file photo by Robert Morris)

With the departure of its school leader little more than a month away, the International School of Louisiana is preparing to promote the current principal of its Camp Street campus to lead the school system for the next three years.

Five members of the school’s governing board said that principal Melanie Tennyson is the right person to continue the school’s success after the departure of Sean Wilson, who leaves July 1 to become the principal of International High School. She has long been considered ready for the job if Wilson ever left, noted board president Matt Amoss.

“I think Melanie’s the right person for the job,” said board member Andrew Yon at a Wednesday night meeting of the Head of Schools committee. “New leadership coming in from the outside is frequently done to right the ship or change directions that the organization is going, and we don’t want to do that. We want to keep going in the same direction.”

The committee only had five of the 10 members of the school’s governing board present, one short of the number needed to issue a formal recommendation in favor of Tennyson’s appointment. That vote would still need to be taken at a full board meeting, however, and board member Chantell Reed said everyone was “on the same page” regarding Tennyson.

The only real question to be decided about Tennyson was how long to offer the job for — whether to make it a short, interim appointment to be followed by a national search, or to give her a more permanent contract. The board members present Wednesday expressed agreement that three years was a good starting point.

Only two ISL parents attended Wednesday’s meeting, and the only concern they raised about Tennyson was the “huge void” in leadership at the Camp Street campus her promotion will leave. Board member Dominique Wilson replied that she had personally raised the issue, and that Tennyson shared a strong vision for addressing it.

Yon said that no one was more aware of the need to maintain academic success at Camp Street than Tennyson herself.

“I left my meeting with her fully confident that she will not allow any slackening off,” Yon said.

The board spent much of the meeting discussing the ongoing search for a new finance director, and how to support Tennyson in that effort. To read our live coverage of the meeting, see below.