A homeless man was jailed last week after pulling a knife on a motorist who argued with him after a request for money, New Orleans police said.

Eric Roberts, 38, approached a driver around 1:30 p.m. last Thursday afternoon (May 22) near the intersection of Simon Bolivar Avenue and Clio Street and asked for money, said Sgt. Daniel Scanlan of the NOPD Sixth District investigative unit. The driver told Roberts to get a job and an argument ensued until the driver got out of the car, at which point Roberts pulled a knife on the driver, Scanlan said.

“The victim could have stayed in his car, but he didn’t,” Scanlan said at the Sixth District’s weekly meeting . 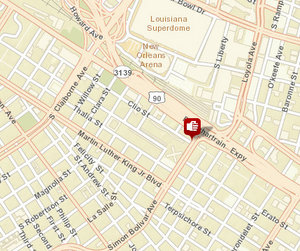 A police cruiser happened to be nearby and the driver flagged the officer down, Scanlan said. Roberts ran into the 1200 block of Simon Bolivar and hid, so police surrounded the block and quickly found him hiding under a house, Scanlan said.

Roberts is jailed on charges of aggravated assault and flight from an officer, jail records show.

Police clearly do not recommend confronting panhandlers, said Sixth District Lt. Frank Young, but they also ask residents “to be selective about their charity” when homeless people along the overpass ask for money. Both the Ozanam Inn and the New Orleans Mission serve the homeless well, and residents can be sure their donations will go toward food, blankets and other essential items, Scanlan agreed.

“If people want to make contributions, the Ozanam Inn and the New Orleans Mission are both great charities in our area,” Young said. “The people standing out there are just as well served by donating to those two charities as by handing them money.”