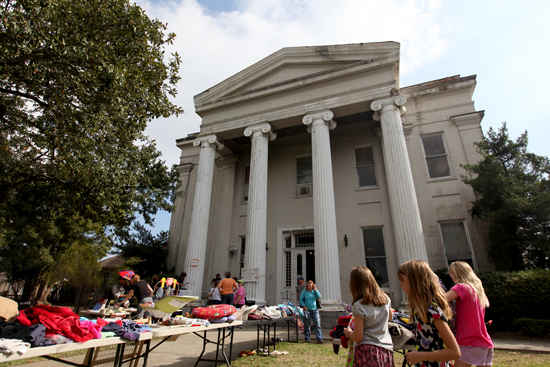 The old Carrollton courthouse, photographed during a school event in 2012. (UptownMessenger.com file)

Now that Audubon Charter School has moved out of the former Carrollton courthouse, the historic building is being placed on the Orleans Parish School Board’s surplus-property list, which could eventually lead to its sale, school officials said Saturday.

The former courthouse on Carrollton near St. Charles Avenue has housed a number of schools in recent years, including Benjamin Franklin and Lusher before Audubon. But the main building — and especially the portable buildings around it — have deteriorated badly, and Audubon parents complained of issues like constantly leaking roofs and poor air quality for years. In 2012, the main building was one of the only schools in New Orleans to suffer serious damage during Hurricane Isaac, when the roof collapsed over an upstairs library, and the Orleans Parish School board moved Audubon to a new temporary site in the McDonogh 7 building on Milan Street for the 2013-14 school year.

Audubon operations manager Alisa Dupre told the charter school’s governing board Saturday morning that she has received word from Orleans Parish that the vacant Carrollton building has been placed on the citywide surplus-property list. Audubon still stores some of the school’s sports equipment there, Dupre said, so she will have to take a final trip back to the property to retrieve it.

State law gives any school in the parish the right of first refusal for buildings declared surplus. Usually, individual schools have little interest in trying to restore buildings that the school board has decided it cannot use, but in at least one case, ENCORE Academy purchased the former Shaw Elementary building in the Seventh Ward off the surplus list and is renovating it to move in next year.

More frequently, some of the Uptown school buildings declared surplus have been sold at auction to private developers who have converted them into private condos. The former LaSalle school, redeveloped by Jim MacPhaille, sold all its luxury units near Audubon Park prior to opening, and a similar conversion is under way at the former Free School on Camp Street.

Dupre said she does not know what the school board plans for the Carrollton building beyond placing it on the surplus list, though Orleans officials have said in the past that they will not use it for one of their schools again. From a practical standpoint, Audubon found it unsuitable for very young students — Audubon moved its preschoolers out of the building after their first year of occupancy because of issues like the old doors being too heavy for them.

Further, because of the building’s historic designation, any renovations there will be held to high standards would likely not be financially feasible for an independent school, Dupre said.

“If you’re going to renovate the main building, which it desperately needs, you have to do a historic renovation,” Dupre said. “That makes it unaffordable for a school.”

The board also held a hearing on the school’s $7.8 million 2014-15 operating budget Saturday morning. To read our live coverage of the meeting, see below.