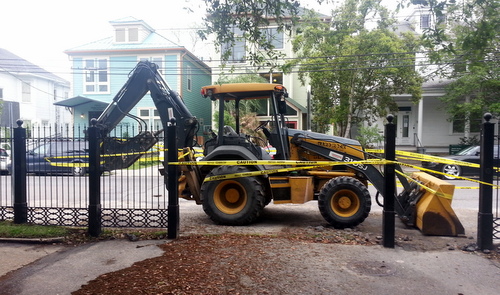 At least two sections of the Newcomb Boulevard fence have been removed as of Tuesday morning. (Robert Morris, UptownMessenger.com)

At least two sections of the controversial Newcomb Boulevard fence were removed Tuesday morning, and city officials say the intersection will re-open to two-way traffic in about a week.

The large center section of the fence and one adjacent panel were removed, although the metal posts still remained in the roadway as of 9 a.m. Tuesday A construction loader sat parked in the center of the opening wrapped in caution tape, preventing vehicles from passing through the narrow space between the posts.

“Removal of the fence, installation of traffic signage, and reopening of the street to two-way traffic will be completed in 7-10 days,” said Tyler A. Gamble, press secretary to Mayor Mitch Landrieu.

The city promised in early January to remove the fence “without delay” after losing a long-running lawsuit from surrounding neighborhood groups calling its creation in 2006 an improper, de facto closure of the street. The fence remained in place and undisturbed, however, for another three months, but last week, the City Planning Commission ruled against allowing the residents to purchase Newcomb Boulevard, which would have kept the fence in place.

Newcomb residents said at the time that it did not appear there was another route for appeals, and that they accepted the planning commission’s decision.