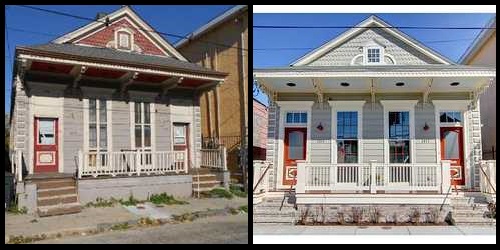 Before and after photos of 1817-19 Martin Luther King Boulevard.

It’s no secret to those that have dipped their toe in the water of New Orleans real estate recently that the stream of activity resembles more of a rushing rapid with unexpected twists and turns included.  The tone of the market possesses a buzz that surprises even the most seasoned flippers and investors, and it shows more promise than concern.  We all know these things ebb and flow, but it’s the perception of spaces that is changing the fastest, the intangible becoming realized in the tangible.  More specifically, let’s look at a cute double that recently flipped in the heart of Central City, but hold on to your hat.  And, as usual, for clarity/disclosure, I did not participate in any part in any of these sales; effectively, I am only an observer fascinated by the pace at which these changes are taking place.

Two years ago, a poor-condition side-by-side shotgun home at 1817-19 Martin Luther King Jr Blvd came on the market for $35,000 on March 6, 2012.  Not without its charms or potential, the dwelling sits on the market for a few weeks before going under contract on March 23, then going to sale 2 months later for $29,000 cash on May 14.  A full-on renovation ensues which one may imagine takes longer and costs more than the party to the transaction anticipates; they usually do.  Nonetheless the market moves along, hammers are swung, paint is applied, and voila on Nov. 12, 2013, roughly a year and a half from its initial sale date 1817-19 Martin Luther King Jr Blvd returns to the market as a beautifully restored multi-family home at an offer price of $369,500.

And then a long cold winter sets in, all holidays come and go, and a new year is born.  At some point, a price reduction takes place to $349,500, and on Jan. 8, 2014 it goes under contract.  The act of sale takes place four weeks later on Feb. 7 via a conventional loan, and the sold price?  $326,000.  Or if you’re a price-per-square-foot kind of person (and you should be, for the record), that’s $151 per foot — which is comparable to prices in the Riverbend, Freret or Broadmoor, but this time in the heart of Central City.  This is of course not a fairytale, but very real facts, supported apparently even by an appraisal given the flip had to pass underwriting somewhere some way.  And bottom line: it’s great.  A home is put back into commerce, tax dollars are collected, and many jobs are created.  The rebirth of New Orleans and her many and varied neighborhoods may be measured quite literally in the interests of buyers.

Lastly, allow me a query to you the reader: are you surprised?  I, for one, am not.  Nothing surprises me in New Orleans real estate anymore.  But I ask, as a general survey, because this whole article was born out of a recent conversation with a non-realtor colleague.  His initial position (and again go back to perception), prior to this flip being brought to his attention, was that perhaps some day in the near future he may find himself an low-price double in Central City, say around Jackson and Baronne.  The crux of this, then, is the changing definition of affordable.  Surely this varies from party to party, and that is exactly what drives the marketplace.  The old adage in real estate is that highest and best use always surfaces for all real property.  Again and again.