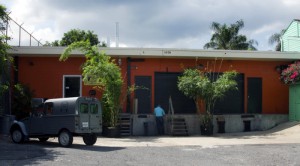 The building at 1020 Erato is slated to become the home of The Courtyard Brewery. (submitted photo)

After months through the city’s regulatory systems, it took only a few very short minutes before the New Orleans City Council for the Courtyard Brewery to win final approval for their Lower Garden District taproom.

Scott Wood, one of the brewery’s founder, took the City Council dais on Thursday for this third time, following two previous appearances before the City Planning Commission. This time, however, all he had to say was “Thank you.”

His wife and business partner, Lindsey Hellwig, said that was the least she had ever heard him say.

“We can’t wait to be good neighbors and show the city what taprooms are about and bring good beer here,” Hellwig said.

City Councilwoman LaToya Cantrell, who represents the area and made the motion for approval, called Wood and Hellwig “great people” interested in getting involved in the community, and said she looked forward to visiting once the taproom was open. With that brief exchange, the council voted in favor of the brewery.