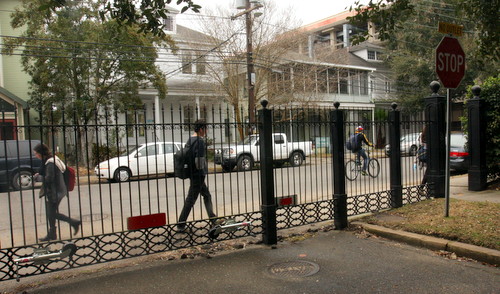 Opponents of the controversial Newcomb Boulevard fence have won a preliminary round in the fight over the street’s future, as city planners are recommending against its sale and closure to the public.

The direction of the city
The staff report contradicts many of the arguments made on both sides of the Newcomb Boulevard controversy. Essentially, it finds that keeping the street closed has little effect on public safety, and that the surrounding streets can handle the diverted traffic. But it also asserts that the cut-through traffic prior to construction of the fence was at reasonable levels, and concludes that keeping the street closed is undesirable primarily because it reduces transportation options in the city.

The report notes that Newcomb is the only path from St. Charles to Freret in the half-mile stretch between Calhoun and Broadway. It also notes that the City Council is considering making Newcomb a one-way street, headed toward Freret.

A traffic analysis included in the report shows that traffic on the street has fallen by nearly 50 percent since the fence was built. In 2004, roughly 450 cars traveled north on the street and 300 traveled south each day; now only about 200 cars travel each way on a daily basis. (The speed of the traveling vehicles has also fallen significantly, the report notes, but speeding might be better addressed with speed bumps.)

The analysis concludes that drivers were using Newcomb as a cut-through from St. Charles to Freret prior to the fence, but that the traffic impact was “normal and not excessive,” the report states. On the other hand, the surrounding streets have absorbed the displaced traffic with “minimal impact,” and the level of traffic at the intersections at Broadway remain acceptable.

Ultimately, while the sale of the street is not specifically addressed by the city’s Master Plan, the planners note that the fence does run counter to the Master Plan’s general support for transportation projects that “reduce barriers” and “enhance connectivity.” Further, the historic character of the city is for streets to be public, the report states.

The staff recommendation is not binding, however, and is only the first of three steps. It will next be debated before the City Planning Commission on Tuesday (April 8), and the commission’s vote will then be forwarded to the City Council for another round of debate and a final decision.

Hundreds of comments
The report includes the 16-page analysis by the City Planning Commission, followed by — perhaps in a hint of what is to come at Tuesday’s hearing — 174 pages of written comments about the fence and roughly 450 pages of signed petitions in favor of the sale.

The written comments — the majority of which are in opposition to the sale — largely follow the pattern of the staff report, arguing more against the principle of closing or selling streets as part of a general statement about the city’s future. They include complaints that the sale would set a “dangerous precedent” of validating what has been ruled an illegal closure of the fence. Many characterize the proposed sale as an effort to create a gated community in New Orleans and “a sure sign that the wealthy in this city and their interests matter more than the public good.”

The Newcomb Boulevard Association, however, submitted a letter saying that it has collected 469 signatures in favor of the sale. Among them are 35 of the 36 residents on the street, and 181 signatures from the 119 properties within the area required to be given notice of the proposed sale.

“The community at large is indeed in support of the sale of Newcomb Boulevard,” writes Christian Rooney, president of the Newcomb Boulevard Association. “They understand the history of the street, the safety issues that exist due to the lack of cross streets and want to keep it as it has been since the traffic barrier was established in 2006.”

Tuesday’s meeting begins at 1:30 p.m. in the City Council chambers, and Newcomb Boulevard is the fourth item on the agenda.