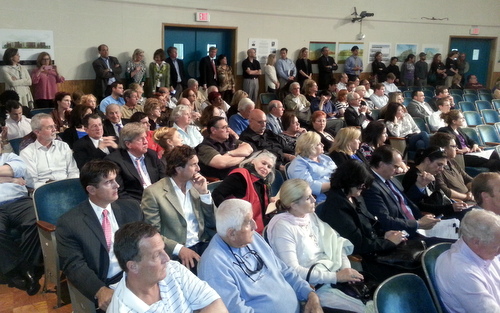 More than 100 people turned out Tuesday for the City Planning Commission hearing on the proposed sale of Newcomb Boulevard. (Robert Morris, UptownMessenger.com) 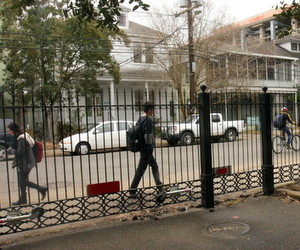 By a 6-1 vote Tuesday, members of the City Planning Commission said they saw a clear public need for Newcomb Boulevard to be open to drivers and the public, rejecting an effort by the street’s residents to buy it and make it private.

What will become of the controversial iron gate blocking the boulevard at Freret Street remains unclear, however. Unlike most City Planning decisions, Tuesday’s vote will not automatically be forwarded to the City Council for review — though officials said it was unclear whether additional avenues remain open for the Newcomb residents.

The meeting featured roughly 70 minutes of back-and-forth between speakers on both sides of the issue, followed by an additional 30 minutes of comments by opponents of the sale. The arguments followed similar patterns to those that have been made in and out of court since the gate was created in 2004.

Newcomb Boulevard was never intended as a public street, said Tim Gray, speaking for the residents. It was originally the site of Leland College (that closed following a hurricane in 1915), which explains its unusual configuration of a straight stretch of four blocks from St. Charles Avenue to Freret Street with no intersecting streets, Gray.

Thus, Newcomb Boulevard was “not designed as part of the street grid,” Gray said. “It was designed as a standalone street.”

That configuration gives rise to the speeding problem that neighbors have suffered from, other Newcomb residents said — drivers used the street as a chute from St. Charles to Freret with no incentive to slow down. And the subsequent installation of the gate at Freret, they said, solved the problem completely.

City Planning commissioners, however, were not swayed by the argument. Speeding is a problem for residential neighborhoods all over the city, said Commissioner Royce Duplessis, but closing a street to public use seemed like “excessive force” as a solution. Likewise, Commissioner Nolan Marshall III said he failed to see why Newcomb is “unique,” as proponents of the sale argued, and was concerned that the reckless drivers blocked by the Newcomb fence are simply being routed onto other streets.

“Why is it OK to displace that traffic?” Marshall asked.

Commissioner Craig Mitchell said the reference to the gate as a mere “traffic control device” rather than a de facto street closure undermined the credibility of the Newcomb residents. Commissioner Kelly Brown said that she sympathized with their desire for a quiet street, but that as a matter of policy it was clear the street is still needed for public use — beyond just the pedestrian and parking uses that the Newcomb residents promised to continue allowing.

“I don’t want to be someone who enjoys Newcomb Boulevard as a courtesy of its owners,” Brown said.

Commissioner Joseph Brown said he was swayed by the “dangerous precedent” the sale of the street would set. Commissioner Kyle Wedberg said that many streets in the city now bear traffic loads they were not originally designed for, but that the fact that any of New Orleans’ 400,000 other residents would still use the street for driving means to him that it should not be sold.

“No street in this city is owned by a single group of people,” Wedberg said.

Only Commissioner Pamela Bryant sided with the residents, saying that the cul-de-sac configuration of Newcomb created more opportunities for pedestrians or bicyclists in the university area without a significant traffic impact elsewhere.

“I’d like to see more walkability and livability and more bicycles in this neighborhood,” Bryant said.

What happens next is not exactly clear. City officials ordered the removal of the gate “without delay” in January, but then did not act on the order, instead waiting for the Newcomb residents to attempt to buy the street.

Unlike zoning and land-use matters that the City Planning Commission normally hears and simply makes a nonbinding recommendation on, the commission must actually approve the sale of public property before the City Council can act on it, Brown said after the meeting. But, whether the city code provides other means by which the issue could reach the City Council is uncertain, she said.

Gray said that he, too, understood there to be no appeal process to the commission’s decision Tuesday.

“Assuming my understanding is correct, then we accept the commission’s decision and we move on,” Gray said.