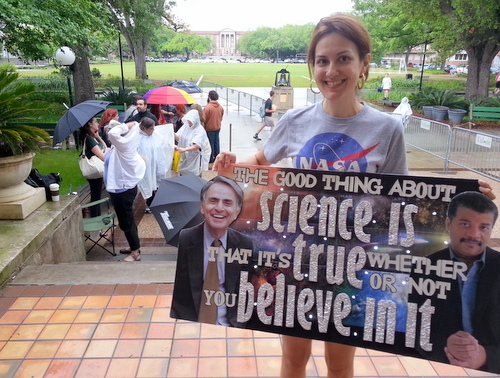 Alba Huddleston holds a sign she made honoring Neil deGrasse Tyson as she waits first in line Monday afternoon for his speaking appearance at Tulane later that night. (Robert Morris, UptownMessenger.com)

A line of diehards waiting all day, even in the rain — that’s the sort of treatment usually reserved for rock stars and Hollywood legends, right?

For a group of local science diehards waiting for his appearance at Tulane on Monday, Neil deGrasse Tyson — the charismatic astrophysicist with the new weekly science show on network television — is definitely somewhere on that level.

“Neil deGrasse Tyson has a very noble mission, and that’s to bring science and science literacy to the masses,” said Alba Huddleston, an industrial engineer originally from Honduras. “He inspires people. If you don’t know exactly what he’s talking about, you can go and research it. You can go and find out for yourself. But he makes you excited.”

Armed with a folding chair and umbrella, Huddleston was first in line at McAlister Auditorium for Tyson’s appearance, arriving sometime around 8:30 a.m. She brought his book and, to make sure her enthusiasm was noticed, a homemade sign that showed Tyson and his predecessor, Carl Sagan. Her hope, she said, was to be able to ask him a question.

Just behind Huddleston was Jenel Hazlett, another science enthusiast braving the light rain Monday afternoon. Part of Tyson’s appeal is his accessibility, she said, and part is his spontaneity before an audience — his stage presence, some might say.

“I wanted to see him in person. I just find how he communicates science fascinating,” Hazlett said. “You never know what he’s going to say, and it’s always fascinating.”

About 30 people were in line by 4 p.m., but as the event drew nearer, the line grew dramatically. By 6:30 p.m., it stretched to Freret Street, and even after the auditorium filled to capacity, people were still waiting outside for any seat that might unexpectedly open up.

Tyson’s address — titled “This just in: latest news from the universe” — was presented as a survey of updates on astronomical developments. He discussed and explained the significance of the Mars Curioisity rover that landed last year, for example, the discovery of the subatomic Higgs boson particle long theorized by physicists but never observed until 2012, and progress in the search for habitable planets outside the solar system.

On his Fox television show Cosmos, Tyson often treats his subject matter with reverence, expressing wonder at the scale and beauty of nature and space. In his lecture, Tyson’s delivery is less formal, and nearly every cosmic “news item” he shared Monday evening was punctuated by the audience’s laughter — most often at the public and mass media’s misinterpretation of astronomical phenomena.

For example, Monday night held a lunar eclipse that many have deemed a “blood moon,” the first of four eclipses of the moon this year and next. After explaining that the reddish shade of the moon prior to the eclipse is caused by rays of sunlight that filter through the atmosphere, Tyson noted that some pastors view this event and its ominous name as a sign of the apocalypse.

“Here’s the problem. Some people take this literally,” Tyson said. “Not people who know how to think.”

As the audience laughed, Tyson went on to say that he doesn’t have a problem with preachers who want to interpret a series of eclipses as a sign of end times — until their misunderstandings started provoking articles in mainstream outlets like USA Today. He then characterized the whole “blood moon” discussion as a digression, and flashed another slide showing an article about the effort to make the Bible the state book.

“Not that this has to do with anything, but we are in Louisiana,” Tyson said as the audience continued to laugh.

Later in the evening, Tyson turned his attention to an astronomical threat that actually could have observable catastrophic effect on the Earth — the arrival of the Superdome-sized asteroid Apophis in 2029, which will pass so close that it will actually travel in between the planet and its communication satellites. The asteroid is not expected to hit Earth then, but depending on the exact path it takes, it does have a small probability of colliding with Earth when it returns seven years later, in 2036, Tyson said.

If the 2036 impact happens, Apophis would likely land in the Pacific Ocean off the coast of California, and would create a series of dozens of five-story tsunamis that would repeatedly inundate the first quarter-mile of land along the entire West Coast, Tyson said, describing the effects in detail. Scientists have devised a plan on paper that would send a spacecraft to push the asteroid off course, but there is no governmental funding for the effort so far.

The much-smaller asteroid that exploded over Siberia last year carried potentially devastating amounts of energy, he noted. But because it blew up 20 miles above the earth’s surface, the only injuries were 1,000 Russians looking at it out of windows that shattered in the shock wave it emitted.

“Asteroids are nature’s way of asking, ‘How’s that space program coming along?'” Tyson asked, citing a favorite slogan that he flashed on a slide.

After Tyson spoke for nearly two hours, he opened the floor to questions from the audience, fielding inquiries about that ranged from his beliefs on various aspects of theoretical physics to his taste in music. And, rewarding her perseverence, Huddleston got a chance to ask her question, telling Tyson that she had waited for the opportunity to see him for 12 hours.

“I hope it was worth it,” Tyson quipped.

Huddleston noted the low literacy rates in her native Honduras, as well as the poverty across many parts of the United States. What can people do, Huddleston asked, to help spread that education across the world, so that other future scientists have access to it?

“There’s a chance that maybe the cure for cancer is in the brain of somebody who can not afford an education,” Huddleston had explained outside the auditorium. “So what can I personally do to help promote science literacy?”

Tyson said it was an issue that he, too, has struggled with. His publicity tour for Cosmos took him around the world, and he was stricken by not only the dire economic conditions he witnessed, but the fact that many people in countries other than the United States have no hope they can change their lot. Something about American culture, he said, includes a persistent work ethic that other Americans seek to reward.

“I don’t fully understand why, but you kind of need some of that so we all collectively rise up,” Tyson said. “It’s one of the great tragedies of the world, the intellectual capital unrealized and languishing in Third World countries. Look at how far this world could have been were it not for this lost opportunity.”