The Magazine Street view of the redevelopment. (rendering by Studio WTA architects)

An upcoming redevelopment slated for three buildings on the corner of Magazine and Nashville streets means that a handful of local shops are moving to make way for a New York City-based business, small business owners and the location’s development company said this week. 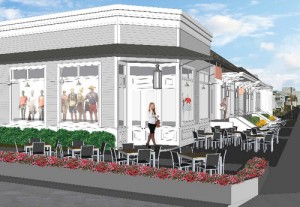 The proposed redevelopment from the corner of Magazine and Nashville. (rendering by Studio WTA architects)

Butler Callahan Holdings development company bought the property on the 5700 block of Magazine, in an area that currently houses the three specialty shops Rare Cuts, Vom Fass and Parcels and Post.  Ben Butler, a managing partner of the company, said Thursday that while he can’t yet announce the name of any new businesses slated to take over the spot, he can say that the company is “in lease negotiations with a very exciting tenant out of New York City.”

“It’s going to be a great addition to the neighborhood,” Butler said. “We have a lot of interest in the property.”

Butler expects construction to begin in May. In November 2013, Butler told Uptown Messenger that he plans on aligning the front of the corner building with the other two, joining the three structures into one space. Butler added that developers envisioned a restaurant with outdoor seating as a major portion of the project, while the remaining buildings would be a mix of shops and retail.

“We’re very focused on stable, higher-end locations, and going in and doing redevelopment or new development,” Butler said in November.

As construction nears, not everyone is excited about the project, however. Representatives from all three businesses being displaced say they don’t want to have to leave their current locations.

“We’ve been here for four years, so we’re established and it’s convenient,” said Chris Herman, the owner of Vom Fass, an “Old-world European” shop that sells oils, vinegars and spirits. “We hate to move but there’s not much to do about it. We just have to hope we’ll have as much success in the new location.”

Herman said that she’s “in negotiations” with a leaser, and can’t yet announce where Vom Fass will be located. Currently, it’s housed on 5725 Magazine Street, but that will change by the end of April, she said.

The other two businesses, however, won’t be going far. Parcels and Post, a specialty shop that ships packages, will be headed five blocks down the road to 5208 Magazine Street, according to owner Heidi Hammond.

And Rare Cuts, a ranch-to-table high-end meat purveyor, will be going a “whopping block and a half” down the street on Magazine Street, next to Tacqueria Corona, according to Mickey Reid, the wife of the shop’s owner.

“We just signed the lease on the first. Now we have to take seriously and gut the whole entire place,” Reid said, adding that the couple plans to expand with retail on one side and private dining on the other.

Reid says that the new location could be open by the middle of April. The company also has a shop opening on West End Boulevard in September, she added, but Reid is thankful that the Uptown shop won’t have to move far.