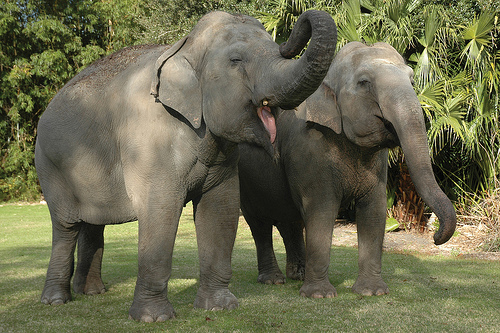 (photo via The Audubon Nature Institute)

On Saturday (March 15), Orleans Parish voters will decide on more than just runoff races for City Council seats. A property tax worth up to $11.9 million a year is up for vote for the Audubon Nature Institute, the organization that supports the Uptown-located Audubon Zoo, as well as the Aquarium downtown and other sites around the city.

Supporters of the millage say it is a renewal of an already-existing tax. But dissenters say that it’s a new tax, because it could mark an increase in funds for the Institute for a period of 50 years.

“The millage is critical to Audubon and the success we’ve had over the years,” Audubon Nature Institute CEO Ron Forman said in a campaign supporting the proposed millage tax renewal.

Forman added that the city’s other services always took priority over the zoo during budgetary meetings in the past. In 1958, the zoo was called an “animal ghetto” by media, and in 1970 was urged to be cleaned up by the U.S. Humane Society, according to information on the Audubon Nature Institute’s website.

“Some people might remember that we were one of the worst zoos in the country 30, 40 years ago, and the reason why is there was never enough money dedicated to the zoo or to Audubon Park, because of the needs of the city between police, between recreation, between housing, and every time we were to go to the budget meetings, we were the last one to get funded,” Forman said.

In 1972, Mayor Moon Landrieu dedicated a small millage for the Audubon Institute, designed to help finance the renovation of the Audubon Zoo. The rate of that millage, which at the time was put at .40 mills, is set to expire 50 years from when it was passed, or in 2022.

A second millage, which passed in 1986, was approved at up to 3.8 mills when it passed. It has been used primarily for the Aquarium of the Americas, and that rate is set to expire in 2021.

One mill is one-tenth of one percent. Altogether, the two millages were approved at 4.2 mills, but since 2007, the city has only been collecting 3.31 mills — or, roughly $9 million a year, according to the Audubon Nature Institute.

“Though it is authorized to collect 4.2 mills, as it stands today, the Audubon Nature Institute collects revenue generated by 3.31 mills,” explained Frank Donze, the Institute’s communications director. “That is due to a rollback approved by the City Council in 2007 after Katrina at the urging of the Nagin administration, which was looking to ease the financial burden on locals trying to rebuild.”

‘A new tax?’
Opposition to the proposal has come from a variety of quarters. The New Orleans Tribune editorialized against it, and in an email circulated to press, New Orleans artist Debra Howell blasted the proposed millage, and accused Audubon Nature Institute officials of being disingenuous about the language of its press release. The release urges voters to renew the tax, saying that the ballot initiative requested is a renewal of existing voter-approved millage and that, without it, the the Zoo and Aquarium will suffer a loss of $9 million annually beginning in 2015.

“Despite these assertions, the “renewal” claim is simply “spin” to introduce a new tax at a higher rate for a longer period and for unspecified purposes, in place of an existing tax that was created at a lower rate, for a period that will expire much sooner, and for projects and purposes that have been completed,” Howell wrote in the email.

“At a time when our cost of living is skyrocketing, our city’s infrastructure is crumbling, our roads are in shambles, and our schools are doing more and more fundraising to survive—to name just a few of our problems—the Audubon Commission asks taxpayers in New Orleans to bind themselves to a 50 year deal costing over half a BILLION dollars for unspecified ‘public improvement’ works to be decided by the Audubon Commission and Institute! Surely, if the Commission and Institute were to devise an expensive project of similar scale and benefit as the highly praised Aquarium or Zoo, they should be required to negotiate funding with the city and taxpayers at that time, rather than simply be given carte blanche now?”

City Council decides rate
According to Donze, however, a tax millage renewal doesn’t necessarily mean that the rate would go back up to 4.2 mills, and therefore it may not cost the city taxpayers any more money than it is now. Although it’s certainly possible, he said, the possibility of a “roll forward” from 3.31 mills would rely on a City Council vote, and that the millage renewal only allots for “up to” 4.2 mills.

Essentially, he added, the millage renewal only suggests combining the two millages that already exist and extending them until the year 2064.

“Audubon officials have not said when or if the question of a roll forward might come, but they acknowledge that it likely will be discussed at some point in the future,” Donze said. “It’s obviously an issue the mayor would have to weigh in on and of course would require council action.”

Nor does all of the money go directly to the annual income for the zoo or the Institute’s other properties.

According to the financial summary in the annual Audubon Nature Institute report, the Audubon Zoo and Audubon Park received $359,414 in dedicated tax millage in 2012, the Aquarium, IMAX, Woldenberg and Riverfront Park received $2,937,646 in millage money that same year and the Butterfly Garden and Insectarium received $234,902 from the millage for operating revenue.

The rest — about 35 to 40 cents of every dollar —  goes to new construction and paying down debt, according to Donze.

“That’s the way the pie is sliced,” Donze said.

Future projects listed on the press release website include zoo upgrades, exhibit renovations in the zoo and aquarium, major road and promenade renovations for Audubon Park and much more.