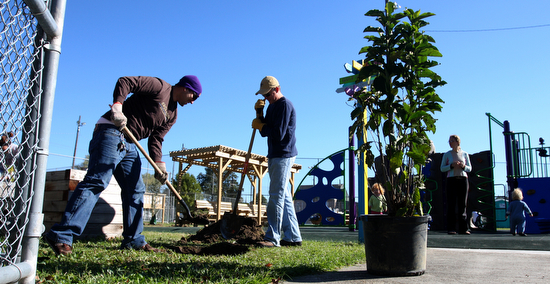 Volunteers plant a tree while children play behind them at Wisner Playground in November 2010. (UptownMessenger.com file photo by Sabree Hill)

By Ramsey Green and Sam Winston, members of Friends of Wisner Park

On Saturday, New Orleanians will vote on whether to approve a new 50-year tax increase with all revenue exclusively designated for the Audubon Institute. You should vote “No” – especially if you value having more functional green spaces in the city like the beautiful Audubon Park.

Before we talk about the merits of this proposed tax increase, let’s talk about what this ballot item is not. First, this is not an “extension” of an existing millage despite what the Audubon Institute’s glitzy PR campaign has claimed. The original Audubon millage, approved by voters in the 1970s, was designated solely to pay for improvements to the Audubon Zoo. The second Audubon millage, approved in the 1980s, was designated specifically to construct the Audubon Aquarium. Both of these objectives, obviously, have been met, and both millages will continue until 2021 and 2022. These millages give between $7.5 to $8.7 million of our tax dollars each year to the Audubon Institute.

Now, however, taxpayers are being asked to replace the existing millages with a brand new tax that will be an overall increase of 27%, and last over the next 50 years, with no specific deliverables. That’s $11.9 million of taxpayer money each year (or $3 million more each year than the current combined taxes) with no specific projects required of the Audubon Institute.

Second, this ballot item is not a referendum on whether the amenities offered by the Audubon Institute are enjoyable. Personally, we both love to visit Audubon Park and do so regularly with our families. But enjoying and supporting the park is not one and the same with giving guaranteed, unrestricted funds to the Audubon Institute that total more than $500 million over the next 50 years. In fact, we’d say it means quite the opposite.

We are neighbors who live adjacent to Wisner Park, a NORD park located about 5 minutes away from Audubon Park on the corner of Upperline and Laurel Streets that offers a baseball field, basketball court, a beautiful playground, and the city’s first publically funded dog run. The park recently received a much-needed renovation and is thriving right now because of it. A park that was once the territory of drug dealers is now filled with a diverse array of playing kids, loving parents, basketball players, softball players, dog owners, and the occasional bouncy castle.

The renovation was paid for and executed by the City of New Orleans through NORD and the city’s Capital Projects office for approximately $250,000. That one-time payment is less than half of what just one of the executives of the Audubon Institute receives in annual compensation (several of which each exceed $350,000 per year). Even though Wisner Park’s renovation cost a tiny sliver of the taxpayer money that Audubon Park receives each year, the quality of life boost that this neighborhood has seen since has been tremendous. What’s more, we at Wisner Park have learned that in partnership with a unified neighborhood, City Hall really can be effective in putting our tax dollars to good use. To put it another way, this isn’t the same city government we had in the past – things are getting done.

And it’s not just Wisner Park. All across the city, the desire to have more functional green space can be seen in every neighborhood. Whether it’s proposed new parks in Bywater, Mid-City, or even in the Warehouse District and the CBD, people recognize that New Orleans is lacking in accessible, and usable, green space in many neighborhoods. The one common missing element in each case is adequate long-term funding.

At Wisner Park, for example, we already know that the funding NORD receives, and the services they can provide from that funding, will not be enough to sustain our park in the long run. And we’re the fortunate ones – many other parks haven’t received the renovations we have. So it’s hard to believe that the Audubon Institute needs an even bigger slice of the pie than they are already getting.

If you’re not convinced, consider this: the annual revenue this proposed new tax would generate would be more than 12% higher than the entire current proposed NORD budget, which oversees parks in every part of the city and provides free services to residents, from Gert Town past Village de L’Est.

That is mind-boggling. And it means that even though every household will pay more to fund the Audubon Institute each year, they still won’t see discounts at the Zoo or Aquarium.

To be clear, we love Audubon Park and do not want to see their current funding cut. Quite the contrary. We want to see the Audubon Institute continue to thrive because we recognize how valuable it is to the city, both as tourist attractions and for residents’ quality of life. But given the substantial tax money they already receive in addition to the grant money, private donations, and fees received from admissions at the Zoo and the Aquarium, we feel that a hurried tax increase doesn’t make sense.

In sum, we simply ask the following: Is giving a blank check to the Audubon Institute — a tax increase at the expense of our other parks — the wisest use of our public dollars? We don’t think so.

Ramsey Green is a small business owner who coordinated the rebuilding of New Orleans public schools until 2012 as the Deputy Superintendent for Operations at the Recovery School District. Sam Winston grew up in Uptown playing at Audubon Park and is currently a practicing attorney in the city.

5 thoughts on “Letter to the editor: More funding needed for public parks like Wisner — not Audubon”