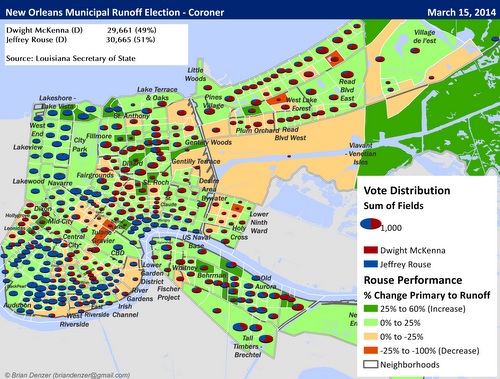 In Saturday’s election for Orleans Parish Coroner, Jeff Rouse picked up votes in precincts across the city with the third-place candidate out of the runoff, while Dwight McKenna saw turnout among his supporters decrease — leading to Rouse’s narrow comeback victory.

Rouse’s electoral performance improved in every neighborhood in the city between Feb. 1 and Saturday, and dramatically so in Gentilly and along the lakeshore, according to an analysis of precinct-level results. Similar to City Council At-Large candidate Jason Williams, Rouse may have picked up voters from third-place finisher Vincent Culotta, to improve his final vote total despite the lower overall turnout.

“Turn-out was the key to victory for Rouse. McKenna’s strongest supporters turned out in fewer numbers in the runoff election, including the neighborhoods of Carrollton, Central City, Treme, the 7th Ward, Upper and Lower Ninth Wards, New Orleans East, and Algiers,” writes independent data analyst Brian Denzer. “Compared to primary election returns, McKenna produced a deficit of 8,754 votes in the runoff. Meanwhile, despite an overall low-turnout runoff in which 19,208 fewer voters participated, Rouse capitalized on get-out-the-vote efforts, boosting his support to an additional 5,372 votes to acquire a narrow victory of just 1,004 votes.”

Rouse’s strongest precincts were in the Uptown, Lakeview and downtown riverside areas, Denzer notes. Uptown was also one of the only areas where Rouse’s vote totals slipped in the runoff, following the curve of decreased turnout overall.

The bellwether precinct in the coroner’s race — where the results Saturday most closely matched Rouse’s citywide result of 50.83 percent — was Ward 13 Precinct 11 in the Freret neighborhood, where Rouse’s 58 ballots over McKenna’s 56 gave Rouse 50.88 percent of the vote. Another close precinct was Ward 7 Precinct 32 (near City Park in Gentilly), where the final vote tally was 79-76, giving Rouse 50.97 percent of the vote. Ward 17 Precinct 7 in west Carrollton was evenly split.