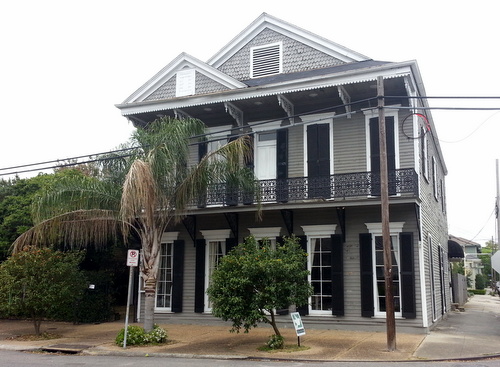 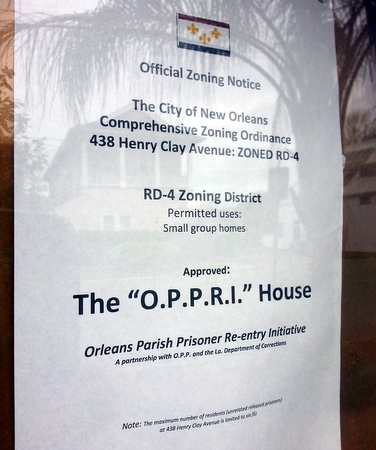 A sign at the Uptowner alerting neighbors of a proposed prisoner re-entry program. (Robert Morris, UptownMessenger.com)

For years, chef Greg Sonnier fought to reopen his old Mid-City restaurant Gabrielle in a banquet hall on Henry Clay Avenue known as the Uptowner, but neighbors eventually convinced the New Orleans City Council to keep the building zoned residential, and Sonnier moved on to become executive chef at the new French Quarter restaurant Kingfish.

Now, Sonnier says he has a plan for The Uptowner that will suit both him and the building’s residential zoning: The Orleans Parish Prisoner Re-Entry Initiative. Local and state corrections officials, however, say they are not involved in or aware of the project.

A sign hanging on the building’s exterior announces the project as “The ‘O.P.P.R.I.’ House, Orleans Parish Prisoner Re-Entry Initiative, a partnership with the O.P.P. and the La. Department of Corrections.” The sign makes note of the official zoning of the building as RD-4, and states that a “small group home” is a permitted use under that zoning.

“Note: The maximum number of residents (unrelated released prisoners) at 438 Henry Clay Avenue is limited to six (6),” the note states.

In an interview Thursday afternoon, Sonnier confirmed that the halfway house is a direction he’s pursuing for the building. He said he was approached by a nonprofit (which he declined to name while negotiations are in progress) that is seeking a grant for the program, and that he would lease the Uptowner to them.

Sonnier said his personal involvement has been limited, except to double-check that the use is already allowed under the city land-use laws.

“It qualifies for that zoning,” said Sonnier, who also still lives nearby on Henry Clay. “I think it’s good direction to take it in, and I think the neighbors will embrace something like that.”

It is unclear how far the project has gotten, however. Pam Laborde of the state Department of Corrections said she was unaware of any prisoner re-entry programs planned for Uptown New Orleans, and the Orleans Parish Sheriff’s Office is not affiliated with it in any way, said spokesman Phil Stelly.

“We are not aware of any partnership between OPP and DPS&C to create a group home on Henry Clay Ave.,” wrote Darryl Campbell of the Department of Public Safety & Corrections on Friday morning.

The Sheriff’s Office does have partnerships elsewhere in the city to help people transition back into society once they are released from prison, an important aspect of preventing recidivism, Stelly said.

“The first 72 hours after a person is released is the most difficult for them,” Stelly said. “We try to connect them to services that former inmates can connect to, to get them back on track and not come back to us.”

In the meantime, what is clear is that The Uptowner’s tenure as a banquet hall seems to be over. Sonnier said he is now focused on Kingfish in the French Quarter, where business is “booming,” and that he has removed most of his commercial kitchen equipment and other belongings from 438 Henry Clay Avenue.

“My part of it was to get everything out,” Sonnier said.

37 thoughts on “Greg Sonnier’s new plan for The Uptowner on Henry Clay: a prisoner halfway house?”