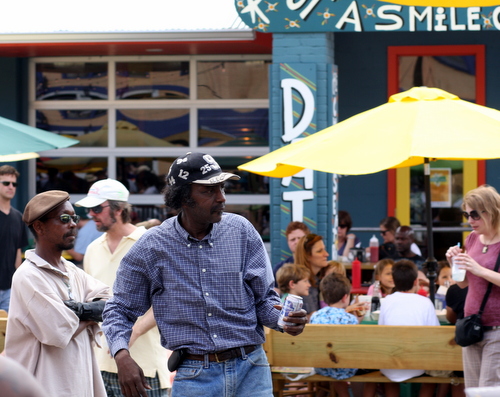 A festival-goer dances in the street in front of Dat Dog during the 2012 Freret Street Festival. (UptownMessenger.com file photo by Robert Morris) 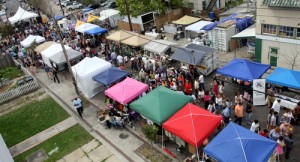 Crowds fill Freret Street between the vendor tents during the Freret Street Festival in 2013. (UptownMessenger.com file photo by Robert Morris)

Although the Freret Street Festival is now in its 17th year, its growth in recent years has mirrored the rapid redevelopment of the commercial corridor — and this year, the April 5 event will stretch all the way to Jefferson Avenue for the first time, adding a fifth music stage to its lineup, organizers said.

In 2013, the event drew more than 23,000 people, organizers said — a dramatic increase from fewer than 10,000 just two or three years earlier. This year, 30,000 people are expected, and organizers are looking for ways to ease congestion so that walking on Freret during the festival remains as pleasant as possible.

One change is that the event will extend from Napoleon Avenue all the way to Jefferson (instead of stopping a few blocks before Jefferson as in the past), but will have the same number of vendors as last year — 200, said Michelle Ingram of Zeus’ Place and the Freret Market.

“We’re not adding vendors; we’re just spacing out those we have,” Ingram said.

Likewise, major vendors will be arranged so that their lines run down side streets, instead of on Freret itself, Ingram said. And the festival itself will run from 11 a.m. to 7 p.m. — an additional hour both at the beginning and end, partly to encourage attendees to stay on Freret for dinner.

“If people can still move around, more people will come, and come to your business on that day,” said Greg Ensslen, also of Freret Market, during Monday evening’s meeting of The New Freret business and property owners’ association. “They will be impressed and come back to your business year round.”

As the festival grows, the costs of producing it are increasing by about 45 percent, Ensslen said. This year, the city is requiring not only 14 police officers, but also 10 fire captains. Businesses on the corridor have been great with sponsorships — including Ochsner, Cure, IberiaBank and others — though Ensslen said the festival is now seeking a major sponsor from outside the area to help defray the increased costs. Other than those sponsorships, Ensslen said the major revenue source for the festival is beer sales.

“Alcohol sales at the event are the lifeblood of the festival,” Ensslen said.

A number of Freret businesses have held grand openings of sorts during the festival, such as Dat Dog at its expanded location in 2012 and Gasa Gasa’s first major public outing in 2013. This year, Gasa Gasa is actually assisting with the music booking, Ensslen said.

Capoeira Maculele and Chaka Zulu will also give performances on Freret Street.