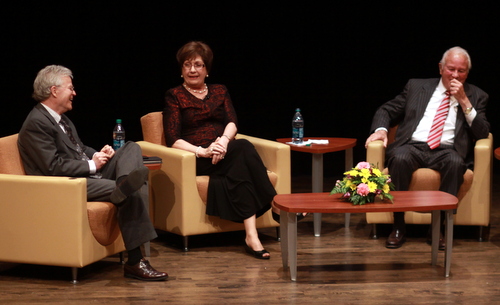 Although former Louisiana governors Buddy Roemer, Kathleen Blanco and Edwin Edwards have a number of political differences, all three agreed Wednesday night that no state officials — neither the legislature nor the current governor — should interfere with the local levee board’s lawsuit against oil companies.

Last year, the Southeast Louisiana Flood Protection Authority-East filed a lawsuit seeking to hold 97 oil-and-gas companies responsible for decades of operations exacerbating coastal erosion that exposes inland residents to more flood risk. Although proponents say the outcome of the case should rest solely on the science underlying it, the lawsuit quickly became a political issue, with Gov. Bobby Jindal first accusing the levee board of overstepping its authority, then removing some of its key members. State lawmakers have also said they will try to change the laws that allowed the creation of the lawsuit.

On Wednesday night, former governors Roemer, Blanco and Edwards took the stage at Loyola University for a wide-ranging panel discussion on a number of issues, but a question from moderator Lee Zurik about the levee-board lawsuit drew emphatic support from all three.

For Roemer, a Republican who ran for President in 2012 on a platform largely based on freeing politics from the influence of corporate money, support for the levee board was natural. The damage to the coastline from the oil-and-gas industry is plainly visible, Roemer said, and the oil companies are simply trying to maximize their profits by shirking the responsibility of repairing it.

“This ought to be a for-profit state, but those who abuse the privilege and don’t pay for damaging the land and water and the air that we breathe ought to pay the cost of it,” Roemer said.

Edwards traced the damage back decades to Gov. Huey Long in the 20s and 30s, and said the companies began moving offshore about in the 1980s. But the lawsuit should sort out where the responsibility lies, Edwards said.

“At the very least, we ought to go to court and find out who is responsible and to what extent,” Edwards said.

Blanco began by agreeing with both of her predecessors that it is well known that “the channels that were dug and not restored have contributed mightily to our land losses.” But she also took exception with the political interference in the levee board itself by the Jindal administration’s use of the lawsuit as a “litmus test” for approving members.

“I’m very proud to say that I created the independent levee board … and designed it to be free from politics,” Blanco said. “I’m rather concerned that it is going to be re-politicized.”

If the lawsuit does survive, it is unlikely to be heard in court, Blanco said. Instead, she predicted that it will lead to a settlement that will still be a major benefit to the state.

“I would predict that these major companies will come to the table — if the lawsuit isn’t destroyed in the political process by the legislature — I think they’ll come to the table and we’ll have a negotiated settlement,” Blanco said. “I think they all know it’s something that’s long overdue, and that they owe something to the state of Louisiana for the mitigation of a tremendous amount of damage.”

The forum also aired the former governors’ views on Blanco’s handling of Hurricane Katrina (Roemer and Edwards rose to her defense), on the Affordable Care Act, on public education, on the Louisiana economy, and on upcoming political races. The panel packed the vast Roussell auditorium at Loyola, and judging by the audience’s reactions, Edwards’ legendary wit was one of the primary attractions.

Many of his laugh lines of the night came at the expense of Jindal. At one point, Zurik asked the panelist to predict where the current governor will be in four years. Roemer suggested a cabinet position under a future President, but Edwards took the question about Jindal in a different direction.

The veracity of Edwards’ allegation about the state crustacean could not be immediately confirmed. The governor’s website does, however, offer a recipe for “Grandma Jindal’s Crawfish Pie.”