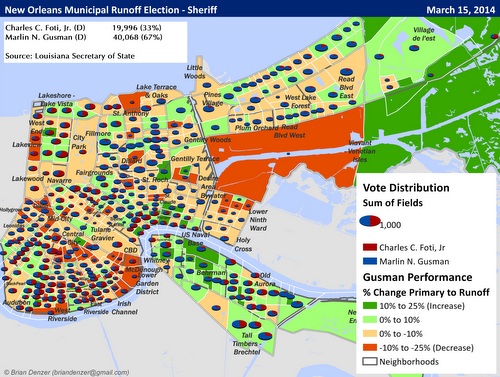 Sheriff Marlin Gusman won 40,068 votes in Saturday’s runoff election against Charles Foti — only about 500 fewer than he won in the Feb. 1 primary despite a dramatic decrease in turnout, suggesting that voters who chose other candidates initially and even some of Foti’s supporters simply stayed home.

Foti lost 3,680 votes between the primary and the runoff, and the 18,000 votes that Ira Thomas and Quentin Brown won in February disappeared altogether on Saturday. Support for Gusman grew in a patchwork of precincts and fell in others across the city in a distribution that does not immediately suggest an obvious pattern.

As in other races around the city, the precincts whose vote totals most closely matched Gusman’s final outcome of 66.71 percent were to be found along the river Uptown (Ward 12 Precinct 3 with 66.88 percent) and behind Gentilly Boulevard in Gentilly (Ward 8 Precinct 22 with 66.47 percent).

2 thoughts on “Did protest votes disappear in sheriff’s race?”