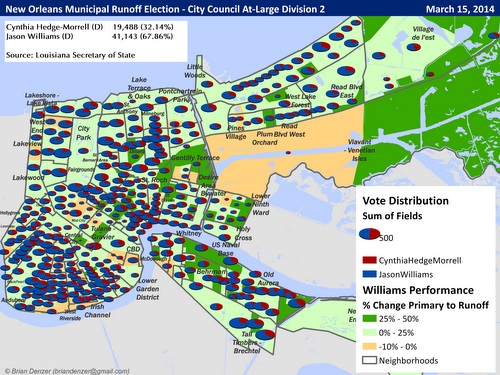 Although voter turnout decreased by 20,000 people in Saturday’s runoff election, Jason Williams actually increased his vote total by nearly 10,000 votes to secure his landslide victory — especially in precincts that Cynthia Hedge-Morrell had initially won in the Feb. 1 primary, an analysis of voting data shows.

In Saturday’s election, Williams held on to the areas he carried in the primary — precincts in Uptown, Lakeview and Mid-City — and expanded his reach into every area of the city. While he only won 30 of the city’s 366 precincts with more than 50 percent of the vote in the Feb. 1 primary, Williams only lost nine precincts on Saturday.

“His performance was really pretty spectacular,” writes independent data analyst Brian Denzer, who compiled precinct level maps of the result. “In an run-off election that produced 20,241 fewer votes than the primary, Williams actually increased the number of votes he received by 9,870 votes, at Hedge-Morrell’s expense, who lost 16,279 votes over the interim.

“This suggests that not only did Williams benefit from Charbonnet’s supporters who opposed Hedge-Morrell, but that Williams succeeded in winning additional supporters after a tough race perhaps best characterized for negative ads by both campaigns,” Denzer continues. “His percentage of support actually increased across much of the city, notwithstanding very low turnout, but he also significantly increased his support by 25 or more percentage points precincts across a swath of the city spanning from Treme to Gentilly Terrace, the Lower Ninth Ward, Algiers, and New Orleans East.”

The breadth of Williams’ victory can also be seen in the diversity of the “bellwether” precincts in the race, those in which the vote totals most closely matched the city as a whole. Williams won 67.86 percent of the vote citywide, just as he did in Ward 10 Precinct 13, which lies in Central City around Jackson Avenue and South Claiborne. The next two closest precincts were Ward 15 Precinct 16 — near Aurora Drive in Algiers — with 67.92 percent of the vote for Williams, and the 67.71 percent he won in Ward 14 Precinct 13A, which sits squarely on the center of Tulane and Loyola universities.

Saturday’s election is historic in that, with electoral losses by Hedge-Morrell and Jackie Clarkson in District C, no member of the incoming City Council has served prior to Hurricane Katrina. Stacy Head, elected in 2006, will be the senior member of the council, followed by Susan Guidry, elected in 2010. Incumbents LaToya Cantrell and James Gray were both elected in 2012, and Williams will join Nadine Ramsey and Jared Brossett as new members.