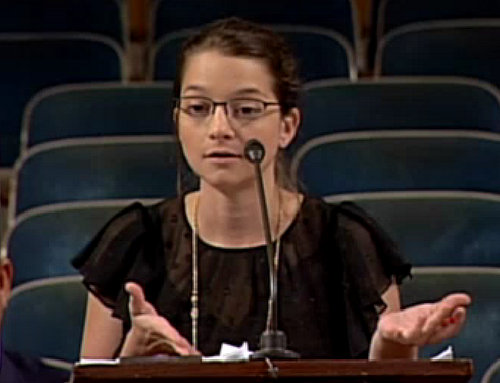 Lindsay Hellwig, a co-owner of the Courtyard Brewery, speaks to the City Planning Commission on Tuesday afternoon. (via nolacitycouncil.com)

After fielding detailed questions about parking, floor plans, dumpsters, gates, curb cuts, trees, sidewalks and deliveries on Tuesday, the owners of the Courtyard Brewery received approval for a new “nanobrewery” in the Lower Garden District from the City Planning Commission, with the outdoor seating allowed that the name implies.

The commission did not give the Courtyard Brewery permission for live music, however, so they hope to make the case for that when their request heads to the City Council in the next month.

The nanobrewery — which will initially brew small batches of beer for aficionados to sample on location in a small taproom at 1020 Erato Street or take home in jugs called growlers — has enjoyed a wealth of neighborhood support and no opposition, but endured a winding path through City Hall thus far. Their first date before the planning commission was canceled by January’s ice storm, and their second was delayed by planners’ request for more detailed drawings as well as additional time to review them.

Finally, on Tuesday, owners Scott Wood and Lindsay Hellwig appeared before the planning commission with their requests. The staffers were recommending that the project go forward, but without outdoor seating or live music, and with a total of 13 other requirements that ranged from restoring a street curb and planting trees along the sidewalk to hiding dumpsters and installing bike racks.

Beginning with a plea for no more delays that could put them out of business, Wood and Hellwig said they were fine with some of the requirements — such as adding bike racks or only using go-cups with their logo on them — but took issue with others, particularly the prohibition on outdoor seating.

“Our name is the Courtyard Brewery,” Wood said. “We took a year and a half looking for the right location in the city. One of our requirements was to find a site that would have a courtyard for outdoor seating. We also made sure we found an area in the city where the neighborhood would be welcoming of such an establishment.”

The area is fairly industrial, with the Pontchatrain Expressway nearly overhead, so added noise should be minimal and there are few neighbors to hear it anyway, Wood said. The neighborhood as a whole is becoming more residential, he agreed, but his block of Erato Street is industrial warehouses and a cell tower.

Their landlord (and closest residential neighbor), Jesse LeBlanc, agreed that neighborhood support has been strong. LeBlanc also noted that the curb cuts into the driveway were created because of the building’s historic industrial use. If the Courtyard Brewery grows out of the location, he would like the opportunity to rent it once again to a tenant that needs more space for deliveries.

“Living on Magazine Street, I haven’t had one neighbor come up to me in opposition to the project,” LeBlanc said. “As you know in the Lower Garden District, the neighbors can be very vocal about various issues.”

At the end of the 45-minute discussion on the issue, Commissioner Robert Steeg proposed approving the project, and reducing some of the requirements on it. The landscaping should not be necessary, the curb cuts should be allowed to remain, and — most importantly to Wood and Hellwig — outdoor seating should be allowed, Steeg suggested.

The live music, Steeg said finally, was not an issue that the commission could address. With that, the commissioners voted unanimously in favor of his recommendations, sending the project on to the City Council for final approval.

“We are hoping Ms. Cantrell can help with live music,” Hellwig wrote in an email after the meeting, saying that they will meet with the councilwoman prior to appearing on the Council agenda in April. “Anywho, we are glad to have outdoor seating. It’s The Courtyard Brewery after all.”