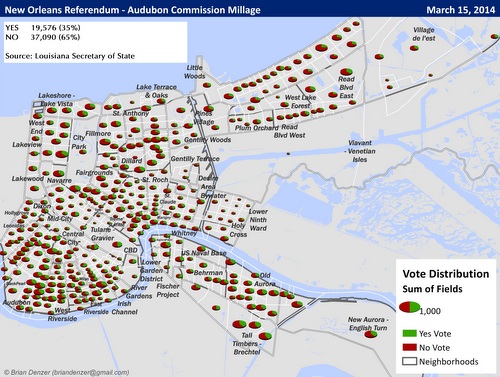 The tax supporting the Audubon Nature Institute was not only rejected by New Orleans voters by a two-to-one margin, but the opposition was also distributed evenly across the city, losing in all but 10 of the city’s 366 voting precincts.

In fact, of the 10 precincts that Audubon won, two precincts had voters in only the single digits, an analysis shows. Of the other eight, three were in the Seventh Ward, two were in Uptown (in Central City and in the university area), one was in the Central Business District, one was in Mid-City and one was in Algiers.

Otherwise, the city’s remaining 356 precincts and 72 percent of early voters cast their ballots against the measure.

“The referendum item only won majority support in a checkerboard of 10 precincts that, combined, totaled just 679 votes,” writes independent data analyst Brian Denzer, who compiled precinct-level maps of the results. “Notably, one of those precincts was 14-13A, which starts at St. Charles Avenue and straddles both sides of the Tulane University campus. It was a firm dismissal of the millage by voters.”

The precinct with the results that most closely matched the citywide result of 65.45 percent against the measure was the Desire-area Ward 9 Precinct 26, also voting 65.45 percent against. Other precincts within a few decimal places of that result were Ward 12 Precinct 11 (near the Baronne corridor in Milan), Ward 6 Precinct 4 in Treme and Ward 3 Precinct 19 in Mid-City.