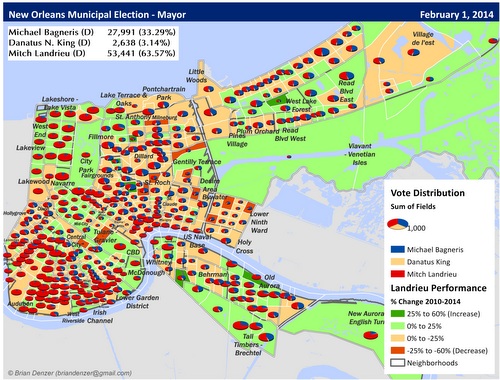 Mayor Mitch Landrieu swept to re-election Saturday with 64 percent of the vote, easily outpacing his two challengers in his bid for a second term — but his support was not as evenly distributed across the city as it was four years ago, according to a map of precinct-level results.

A map of Saturday’s results in the mayor’s race from the Secretary of State’s office by independent data analyst Brian Denzer shows that Landrieu enjoyed tremendous support in most of Uptown — winning more than 90 percent of the vote in some 14th Ward precincts around Audubon Park — though the results were slightly more mixed in some parts of Hollygrove and Central City. Support for Landrieu was also very strong in Lakeview, Mid-City, the Central Business District, French Quarter, Marigny and Bywater, and almost all of Algiers.

Gentilly and the Seventh Ward showed varying results at the precinct level — in some, Landrieu’s support was similar to his results citywide, while in others, Landrieu fell below the 50 percent mark, with higher tallies for Judge Michael Bagneris.

It is east of the Industrial Canal, however, where the votes most strongly favor Bagneris. The former judge won or split most of the precincts in the Lower Ninth Ward and many in New Orleans East as well.

Bagneris has blamed his loss in part on low turnout, and Denzer notes that 5,000 fewer votes were cast in 2014 than in 2010. However, even if all 5,000 of those votes had been in Bagneris’ column, Landrieu would have still easily avoided a runoff.

On the other hand, Landrieu’s victory was “not the landslide that Landrieu won in 2010,” Denzer notes, in which Landrieu won every precinct except one in Venetian Isles that went to John Georges.