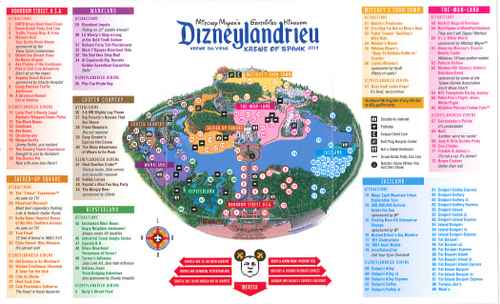 A map of “Dizneylandrieu” distributed by Krewe of Spank members during the Krewe du Vieux parade Saturday night. (image via @noladishu on Twitter; click for larger version)

The past twenty years have seen the popularization of a relatively new word: Disneyfication. The Wikipedia article on Disneyfication defines it as “a term which describes the transformation of something, usually society at large, to resemble The Walt Disney Company’s theme parks.”

Many people, including me, have linked this concept to policies coming from New Orleans City Hall.

Those of you who went to see the Krewe du Vieux parade Saturday evening were greeted by a float emblazoned: “Dizneylandrieu.” Beneath a caricature of Mitch Landrieu as Mickey Mouse, Krewe members dubbed “Mitchkateers” distributed maps of “mayor-approved adventure[s] in the Gentrified Kingdom.”

There’s a good deal to work with here. Mayor Landrieu’s Disneyfied policies include his proposal for “closing hours” for Jackson Square, signing a law banning certain speech on Bourbon Street, his support (later retracted) for the recently-proposed noise ordinance, his well-publicized enforcement crackdowns on alcoholic beverage outlets and live music venues – the list goes on.

Although obviously to a lesser degree, one could argue that Landrieu is attempting to pull off something akin to Mayor Giuliani’s tenure in New York.

Jen Doll of The Village Voice notes that one upon a time, Times Square was a wild place. It ended when “a man named Rudy Giuliani rode in on his metaphorical white horse and the Disneyification of Times Square began in earnest.”

This trend spread across the rest of New York to where by 2011, the Wall Street Journal reported that filmmakers were having difficulty presenting New York as its classic, gritty 1970’s stereotype. Dark alleyways have been replaced by overpriced, modern-styled condominiums.

To my knowledge, Landrieu isn’t working to shut down the smutty venues of Bourbon Street, and his efforts to sanitize New Orleans have been met with serious backlash. Moreover, while some new money is being drawn into New Orleans, it pales in comparison to the resources of New York. We’re not going to run out of dark alleyways anytime soon.

However, there is still a push to make New Orleans smaller, wealthier and more sedate. Those who support these ends have found a sympathetic ear in Landrieu, as well as the majority of the city council. 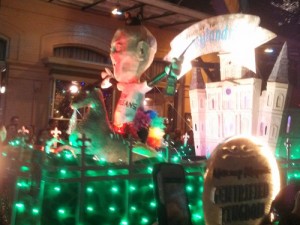 Admittedly, the concerns over a Disneyfied New Orleans predate the Landrieu Administration. Post-Katrina, many academics raised fears that New Orleans would be rebuilt for the elite. Some of these concerns were overblown: outcry against the demolition of public housing belied the fact that the process had already been set in motion, and that it was popular.

Moreover, geographic factors could hardly be helped. The older, wealthier parts of the city were more likely to be spared by flooding, and those that were not had more resources with which to rebuild. unavoidable.
There is a difference, however, between natural trends and public policies. There is a difference between a reality and an agenda.

Ultimately, we need to work to provide essential services fairly and leave the buzzwords and broad social strategizing to the analysts and policy wonks. New Orleans should be an organic city, not an artificial creation crafted by entrenched interests.

We need a real city, not a theme park. New Orleans is not Disneyland.

20 thoughts on “Owen Courreges: ‘Dizneylandrieu’ is more than just a clever float”