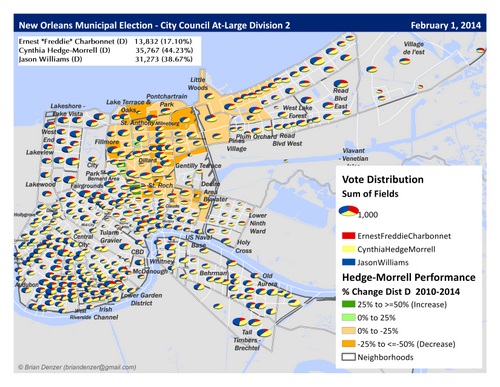 New Orleans City Councilwoman Cynthia Hedge-Morrell won over voters in far more precincts than either of her two challengers, but Jason Williams and Freddie Charbonnet together won far more voters than she did — making for a spirited contest with advantages on both sides between Hedge-Morrell and Williams heading into the March 15 runoff.

Charbonnet, the third-place candidate, won a sizable portion of the voters — 17 percent, more than enough to vault either Hedge-Morrell or Williams to victory. Which way those voters will break may be difficult to predict — Hedge-Morrell ran as an experienced incumbent in a city on the right track, while Williams ran as a qualified outsider prepared to ask harder questions about the city’s true state of affairs. Charbonnet ran neatly between them, touting both his experience and knowledge gained as an interim council member and a fresh approach.

Independent data analyst Brian Denzer, who has been compiling precinct-based maps of the results of each of the races in Saturday’s elections, sees a vote for Charbonnet as a likely vote against the perceived incumbent, Hedge-Morrell.

“One word summarizes Cynthia Hedge-Morrell’s showing in the primary: Vulnerable,” Denzer writes. “More voters chose a different candidate than Hedge-Morrell in the city-wide At-Large Division 2 election. She now enters a run-off election in which her challengers earned more votes than she did in high-performing precincts where voters will probably go to the polls.”

Hedge-Morrell, however, starts with a clear advantage in terms of the number of the city’s 366 precincts she won, the data shows:

But in the vast majority of the city — 232 precincts — Charbonnet’s presence on the ballot kept either Hedge-Morrell or Williams from winning a majority. Of those, slightly more precincts — 121 — might be considered as leaning toward Hedge-Morrell, in that she was the top vote-getter. But 103 precincts leaned in Williams’ direction, and the question is whose support is more likely to grow. (They tied exactly in eight precincts.)

Denzer notes another possible challenge for Hedge-Morrell as well: While she led in the District D precincts where she has run before, her results there on Saturday were lower than in her blowout 77-percent victory over Denise Holden in 2010.

Hedge-Morrell does not “enjoy as much support as she might expect as an incumbent, either within her familiar District D boundaries, or in other areas of the city,” Denzer writes.

Charbonnet has yet to say whether he will endorse in the runoff.

“In the end, the voters spoke and their voices were heard,” Charbonnet wrote on his Facebook page Sunday after the election. “Let’s all do our best to make New Orleans a safe city we are proud to call home.”