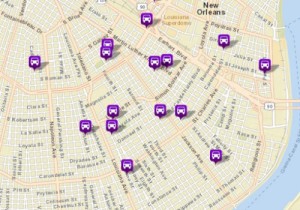 Auto thefts around the Sixth District. (map via NOPD)

The number of auto thefts occurring in the Sixth District plummeted from 12 to zero after a contraption known as a “tow wagon” was taken off the streets, New Orleans police said at a weekly meeting at headquarters Friday.

Police have videos showing the tow wagon lifting parked cars and being driven off, NOPD Sixth District Commander Bob Bardy said. The contraption lifted the cars up from underneath, hooked into their bottoms and towed them away, without having to break any windows or start engines, according to police.

“That has been our nemesis,” Bardy said about the tow wagon and the number of auto thefts in the district.

A truck carrying the contraption was found in Mid-City on the corner of Carrollton and Bienville streets, said NOPD Lt. Frank Young. The truck wasn’t towing a car at the time, however.

Police weren’t able to make an arrest when the truck was pulled over, Young added, because none of the videos in police custody show enough information.

“We didn’t charge anybody because the videos don’t show any people, so the investigation continues,” Young said.

He added that he was going to call the New Orleans District Attorney’s office to see if he could keep the truck in police custody as evidence.

“I want to see if I can seize a car that was actually used to seize cars,” Young said.