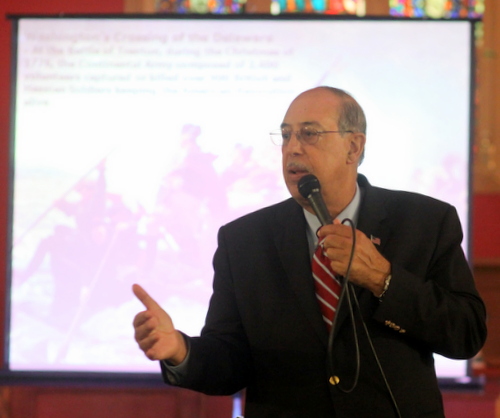 Lt. Gen. Russell Honore, best known for his no-nonsense leadership in New Orleans immediately following Hurricane Katrina, returned to the city Monday night in his new role: condemning entire generations of Louisiana lawmakers for an acquiescence to major chemical companies that is now compromising the future of the state.

Speaking before the Louisiana Landmarks Society at the First Unitarian Universalist Church in the center of Uptown New Orleans, Honore may have been preaching to the choir, or, as he calls them, his “Green Army.” What they really wanted to know — like so many audiences the general has spoken to around the state — is whether Honore plans to run for governor.

‘Something greater’
Honore’s address is built on broad themes: the unbelievable sacrifices made for freedom by every past generation of Americans, the responsibility to preserve those freedoms and pass them on, and the unchecked damage to natural resources by reckless petrochemical companies and the politicians who willingly enable them.

The American revolutionaries were hopelessly outmatched, Honore says, but prevailed over one of the world’s mightiest armies because they were rallied to the common cause of freedom expressed in the Declaration of Independence. Every generation since then has an obligation to continue that fight, no matter how impossible the odds seem, he said.

“They were fighting for something greater than them, that generations following would reap the benefits of that fight,” Honore said.

Part of that responsibility, Honore said, is that we pass on to our children a healthy environment, but on that account, Louisiana lawmakers have failed miserably for decades.

“What our ancestors fought for was the human right that everybody would have access to clean water, clean air and safe food,” Honore said. “That is under assault every day.”

‘Not supposed to smell bad’
Honore had no shortage of local environmental disasters to illustrate his points.

And all of these decisions are made, Honore said, in the name of “good jobs” and the fear that these companies might leave.

“If terrorists came and said they would create jobs, would we let them in?” Honore said.

Running for office?
When Honore began taking questions from the audience, the topic quickly turned to whether he would run for governor himself. Although Honore reportedly told a crowd at the University of Louisiana at Monroe last week that these issues “tempt” him to run, he downplayed the chances of a gubernatorial bid on Monday.

More seriously, Honore said his platform would never win. In addition to his environmental advocacy, his top priority would be enhancing preschool through high school public education with the latest technology — though not college, which he said students should pay for on their own. He also said he would advocate consolidating “half” of the small town and parish governments around the state, calling them unwieldy.

“My platform wouldn’t carry water,” Honore said — to which an audience member called out, echoing his earlier statements about leadership: “Don’t be afraid of the impossible!”

Instead, Honore said his present focus is a legislative agenda, creating more oversight and regulation on behalf of clean air and water. New issues arise every day, he said, pointing to the recent amoeba in the St. Bernard Parish drinking-water supply and Sunday’s oil spill in the Mississippi River.

“Some people might say it’s exaggeration. Go walk this city for three blocks, you’ll smell something. Go to the river, and there’s poison in it,” Honore said. “This is real. We have been blessed, but we’ve got to have new rules to protect us.”

To hear the first part of Honore’s address, see the video below: