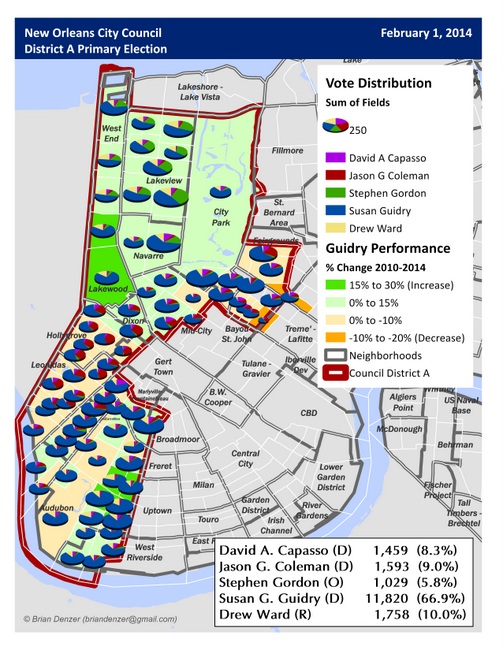 A precinct-level analysis of Susan Guidry’s win by Brian Denzer shows results by individual precinct and a comparison of Guidry’s performance from 2010 to 2014. (click for PDF version)

Not only did City Councilwoman Susan Guidry win a larger percentage of the votes cast in her re-election bid than she did four years ago, she also won a larger total number of votes, an analysis of the results shows.

In Saturday’s election, Guidry lead the field of five candidates in each of the 80 precincts in District A, according to data from the Secretary of State’s office. Guidry, a Democrat, won more than 50 percent of the vote in all but four precincts — two in Lakeview and two in Hollygrove.

The second-place finisher, Republican Drew Ward, drew 10 percent of the voter overall but saw higher margins in the university area of Uptown and around the West End neighborhood of Lakeview. Jason Coleman, who came in closely behind Ward with 9 percent of the vote, saw his strongest results in the Hollygrove and west-Carrollton areas.

An comparison of Guidry’s results from 2010 to 2014 by independent data analyst Brian Denzer shows that her appeal may have shifted more to the political center over the course of her first term — or, the field shifted leftward around her. In 2010, Guidry won the seat from a Republican in a seat that had recently been held by Republicans. In 2014, however, her support grew in the Lakeview and university areas that traditionally vote Republican, while her Democratic challengers ate into her totals in the more Democratic areas of Mid-City and Carrollton.

Other observations by Denzer: