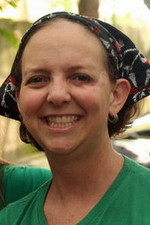 It has been exactly a year since I was diagnosed with stage IV melanoma, having fairly large tumors in my lung and my abdomen. The good news is that I feel great and I have less cancer in me today than I did a year ago. The bad news is that I still have one large tumor and, as of today, there is no cure.

I already knew what was ahead for me as I sat in the doctor’s office on Feb. 7, 2013, listening to him confirm that the lung tumor biopsy results showed my melanoma had returned, three years after I had it removed from my face. The lymph nodes had come back clear, and my dermatologist and I were celebrating moving the big decrease in the chances it would return — except, unbeknownst to us, it already had. I knew the percentages of patients with melanoma metastasis to the lungs who survive one, two and five years are 33%, 18% and 10%, respectively. I also knew there was hope, with many stage IV survivors out there and ground breaking new treatments on the horizon.

But more than anything, I knew I felt good and I needed to get to 8th & St Charles and start setting up for the Muses parade that night before there were no spots left.

Cancer is not supposed to happen to me. My grandmother died of colon cancer but I am very careful with my diet, including being vegan for over 10 years and vegetarian for even longer. I eat organic and non-gmo foods. I work out, have done yoga for 15 years, and meditate somewhat regularly. Of course I am also an ex-smoker and like to drink. All my body care and cleaning supplies are vegan, non-fragrant and mostly chemical-free. I use glass, not plastics, for eating, drinking and cooking. I use fluoride-free toothpaste and the hippie deodorant that doesn’t work at all. I drink about a gallon of water a day. I don’t do fake sweetners, in fact I hardly ever eat sweets at all. (I do like French fries though and an occasional Diet Coke, especially after a night of drinking.)

Also, I am happy and pretty stress-free these days, the happiest I’ve probably been in all my life. I’ve been through some pretty rough times in my 40 years and for the first time I really feel at peace. I have a job I like that pays well and has good benefits. I have a 150-year-old creaky, drafty house that I love in my favorite New Orleans neighborhood. I have a great partner, two awesome happy and healthy boys in great public schools and a cool old dog. I’ve been stressed in my life but definitely not over the past few years. But I do have two other things working against me: my genes and my LOVE for the sun.

My mom’s cousin, a young mom herself at the time, died from melanoma when I was a child. My maternal grandmother’s family also has lots of redheads and a few more of them have had melanoma since then. Redheads are more likely to get melanoma even if they never step foot in the sun. I knew better but I love the sun. As a teenager and young adult I loved being tan but as I aged it was more just about feeling the soothing warmth of the sun on my skin. So, for all my good luck and healthy living, I also have the misfortune of having the right combination of genes and risky behavior needed to get melanoma.

Last February I started with a 4×3.5 cm tumor on the lower left lobe of my lung and a 7.5×5.5 cm tumor in abdomen. A year later I have no new tumors and only the abdominal tumor is left. Over the past year I’ve spent 35 days in the hospital, had seven CT Scans, three brain MRIs, three blood transfusions, and I can’t even count how many times I’ve had my blood drawn. I’ve spent over $6,000 in medical bills alone and that doesn’t count the cost of traveling to Houston 12 times for treatment.

There is no standard treatment for stage IV melanoma because no one treatment has proven effective. I started my first four-month treatment at M.D. Anderson last March which was a combination of three traditional chemos and two immunotherapies, which requires a seven-day hospital stay, five for drug infusion and two to recover. In July I started a new oral targeted therapy drug specific to my tumors gene mutation, Gleevec, which has side effects that are generally less toxic than chemo.

My December scans showed more slight growth of the lung tumor so in late December I had surgery to remove as much of the lung tumor as possible. They were able to take out most of the satsuma sized tumor but did not get clear margins. Last Friday I started another new treatment, an immunotherapy called Yervoy. I am able to get this locally at Oschner’s infusion center. This also generally has less side effects than traditional chemo. I will do the Yervoy in combination with the Gleevec I have been on since July. This new drug works by unmasking cancer cells so my immune system recognizes them as harmful and kills them.

One cool thing about having an incurable cancer is that you get to try all the latest breakthrough drugs and it really is an amazing time for cancer research. The research is leaning more and more towards these types of targeted therapy and immunotherapies to take advantage of your body’s own systems in the fight against cancer. It is really fascinating — when it works, anyway.

So, a year later, thanks to some incredible advances in the treatment of melanoma, I have no new tumors and only the abdominal tumor left, which is mostly necrotic (in other words, dead). The necrosis makes the tumor soft which means it is not causing discomfort like it did before. The only disease progression I have had is the lung tumor which they also found out was mostly necrotic when they removed it. For stage IV M1c (highest stage possible) melanoma this means I am doing awesome! The hope is that by adding in the Yervoy treatment I can actually get to NED (no evidence of disease). I am almost back to my pre-biochemo workout level and my hair is growing back.

While all of this is great news I am constantly reminded how often melanoma returns and when it does, it is usually with a vengeance. I’ve seen fellow melanoma patients go from NED to dozens of tumors in a month and from clean brain scans to 2 cm tumors in as much time. Of course, I have no intention of sitting around worrying about it but at the same time I am always cognizant of it.

Despite the fact that the odds are still technically very much against me, I can’t help but sit back and feel thankful. I have the most incredible support system of family, friends and neighbors who have done so much for me. They put together a benefit raising more than enough money to cover travel and medical expenses over the past year. It was also a pretty cool party. People brought over lasagnas, vegan soups, crackers and 7-Up. I got sun hats and funny t-shirts. Family members and friends helped with watching the boys. There were also all the miscellaneous things like cards of encouragement, emails, help cleaning the house, Tibetan prayer flags, Saints tickets for the whole family, a tour of the Saints training camp and field passes for the Saints home opener! I really am lucky.

I’ve also been lucky that for the most part none of the treatments or the tumors have kept me from doing things I love. Over the past year I attended over 30 Mardi Gras parades, the Mayor’s Mardi Gras ball, two St Patrick’s Day parades, my benefit party, Lyons Center ribbon cutting, the last day of Jazzfest, ISL’s last day of school parade, my birthday party, a short trip to the Mississippi coast, Christmas in DC, Saints training camp, a special awesome tour of Saints training facility, a couple of second lines, six home Saints game including field passes to the Saints home opener, a few Pelicans games, Halloween trick-or-treating, Krewe of Boo parade, the Zephyrs’ Sci-Fi game night with Starfleet and much more.

Now here I am, a year later, anxiously awaiting the start of this year’s parade season. I am much more focused on Mardi Gras and parades than my next Yervoy infusion on the 21st or my next scans in April. I feel great and am not about to waste time on worrying about dying of cancer. I look forward to seeing everyone on the parade route and will bug you about wearing sunscreen, even if it is cloudy. If you forget to bring yours, you can find me on the neutral ground side at 8th & St Charles and I’ll have plenty of sunscreen to go around.

[Kara Morgan is the president of the Irish Channel Neighborhood Association.]

12 thoughts on “Guest column: Battling incurable cancer, one Mardi Gras at a time”