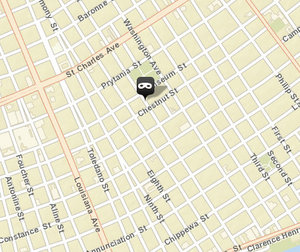 A Garden District man and woman were tied up by three intruders who forced their way into the couple’s Sixth Street home and robbed them at gunpoint Wednesday evening, New Orleans police said.

The victims, a couple in their late 60s and early 70s, were at home in the 1300 block of Sixth Street around 6 p.m. when the man went to answer a knock at the door, according to the initial police report and an account by the victim. When he opened it, a man he didn’t recognize said he was looking for “Bryan,” but the resident told him no one by that name lived there and the stranger left, the victim said.

The same man returned 20 minutes later with two others, and this time, the man was in another part of the house and his wife answered the door, the victim recalled. The men pushed their way inside, forced the woman and her husband into an office, tied their hands with dog leashes and covered their faces with pillowcases, the report states.

One of the men had an “odd-looking” gun, small with a long barrel, the man said. Both he and his wife were able to remain relatively calm throughout the incident, he said.

“One fellow just kept reassuring us that we’d be OK, and they would be gone soon,” said the man, who asked that his name not be published. “I didn’t have any choice but to believe them.”

The intruders went through the home stealing the victims’ belongings, then left without further incident, the report states. The man noted that they took a strange assortment of items, such as old film cameras and Timex watches.

Police were able to track the men to a location in Jefferson Parish, where they were apprehended and most of the victims’ belongings recovered, the man said. Police have not released the names of the suspects.

The victims had not seen any of the intruders before, and have no idea why their house was targeted, the man said Thursday morning. They had just moved to the Garden District a few months earlier, after living several years in the French Quarter, the Marigny and on State Street.

“It is a surprise,” the man said. “Now I’m in what you would think is the safest, most conservative part of the city.”

Home invasions — including Wednesday’s incident — are classified as “aggravated burglaries,” which carry a mandatory sentence of between one and 30 years in prison.

7 thoughts on “Garden District couple tied up, robbed at gunpoint by three intruders in home invasion”