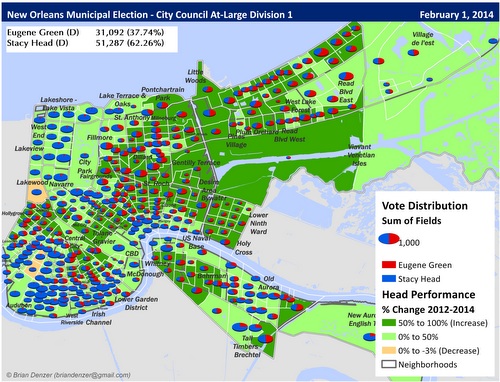 Despite the well-known rivalry between Mayor Mitch Landrieu and City Councilwoman Stacy Head — she was the only incumbent council member he declined to endorse for re-election — the two were re-elected by very similar margins across the city, with support from very similar precincts.

Head prevailed over Eugene Green with 62 percent of the vote. She won 215 of the city’s 366 precincts, according to a map of data from the Secretary of State’s office by independent data analyst Brian Denzer — fewer than the 266 that Landrieu won outright, but in similar areas. But Head also dramatically improved her standing with voters since the narrow 2012 special election that earned her the citywide seat.

Stacy Head was the beneficiary of a major improvement in turnout from the 2012 election. Over 30,000 additional voters turned out for the 2014 election. Head earned almost as many votes in 2014 (51,287) as were cast overall in 2012 (55,293). Meanwhile, she improved her ratio of votes relative to her challenger. Head secured a victory with only 281 votes above Willard-Lewis in 2012. By contrast, the incumbent Head defeated Eugene by more than 20,000 votes in 2014. She not only benefited from greater turnout, but from a higher level of support.

The geographic characteristics of support for Head very much resembled Mitch Landrieu’s, with the same high concentrations of support in Uptown, the Garden District, Warehouse District and CBD, Marigny, Bywater, and Algiers Point. Perhaps more defining of that support than anything else is the relative affluence of those precincts. On the other hand, just as was the signature of Landrieu’s diverse support, Head enjoyed substantial support throughout the city, with (again, like Landrieu) relatively softer support in the 7th Ward, New Orleans East, and Algiers, which were precincts showing stronger support for Green.

A consideration that merits additional research is whether voters in precincts that supported both Landrieu and Head turned out in greater numbers than other precincts. If so, higher turnout in poor-performing precincts might have produced a more competitive election.

An additional consideration is whether Head is eyeing herself a bid for mayor in the future. If so, the fact that her support overlaps Landrieu’s suggests that there is a formula for success. It’s also interesting to note that the very same precincts that boosted Landrieu to victory, also strongly supported Head. For all of the animosity between the two, it would seem the same voters are pleased with both of them.

In the City Council At-Large Division 1 race, the precinct that was closest to Head’s citywide 62.26 percent total was Ward 13 Precinct 1, which runs just upriver of Napoleon Avenue and includes Wisner Park, where she received 62.18 percent of the vote. Other close precincts within a point of her citywide total were: her 62-percent total in Ward 16 Precinct 9, along Carrollton Avenue in Gert Town; her 62.89 percent in Ward 5 Precinct 9, in Mid-City, which runs on either side of Orleans Avenue near Warren Easton Park; and her 61.42 percent in Ward 8 Precinct 21 in Gentilly — a precinct also accurately reflected the results of the mayor’s race.