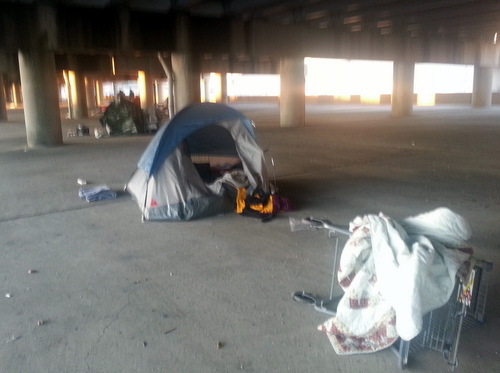 A woman was found dead in a tent Wednesday afternoon underneath the Pontchartrain Expressway overpass at the edge of New Orleans’ Central Business District, after a night so cold that area homeless advocates were out trying to get as many people indoors as possible.

Police and paramedics discovered the woman’s body around 2 p.m. still in a blue tent near the overpass onramp by LaSalle Street, said three men who said they stayed the frigid night in tents nearby. The woman was middle-aged, they said, and while they didn’t know how or when she died, it must have been overnight, because they did not see her all day until authorities arrived, they said.

John Gagliano, chief investigator for the coroner’s office, confirmed that the woman was found dead in the tent there, but said her cause of death will remain unknown until an autopsy scheduled for Thursday, Gagliano said. Her name is not being released yet either, he said.

Officials at the New Orleans Mission said Wednesday afternoon they had heard of the woman’s death, but that she wasn’t a client of theirs. Mission workers conducted a sweep Tuesday night to bring in anyone cold on the streets, said Will Johnson, director of security, but homeless people who live in tents are often difficult to convince to come inside.

“They usually stay where they’re at,” Johnson said. “Usually the people that come are the people who are out on the ground. The people in the tent usually don’t come no matter how cold it gets.”

Temperatures dropped to near record lows in the mid-20s overnight, but the man whose green tent under the overpass was nearest the dead woman’s said he chose not to go to a shelter, despite the weather.

“I got blankets and a sleeping bag, you know,” he said, declining to share his name with a reporter. “You learn to adapt if you take care of yourself. You’ve got to adapt to what the situation is.”

News of the woman’s death had already reached the little yellow corner store at Simon Bolivar and Clio where she was known to sit on an upturned milk crate nearly every day, laughing and joking around. Richard Dowling, a customer at the store, said it was actually her friends from that corner who first discovered her body — they were surprised she didn’t show up Wednesday, and when they walked up to her tent, found her unresponsive.

With that, Dowling headed off down the street, hunching his shoulders against another cold night ahead in New Orleans.