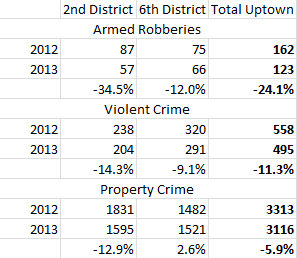 Crime tallies from the Uptown-based Second and Sixth Districts in the 52-week period ending Jan. 4, 2014.

Despite a citywide rash of armed robberies around New Year’s, Uptown New Orleans ended 2013 with roughly 25 percent fewer armed robberies than the year before, presenting both a similar rate of success and challenges as the reduction in murders across the city.

Meanwhile, a wide-ranging investigation may have broken up the gang responsible for those robberies at the year’s end, investigators say.

The Uptown-based Second and Sixth NOPD districts — which span from Hollygrove to the Lower Garden District, and everything in between — ended the year with approximately 123 robberies, down from 162 robberies during the same period the year before, a 24-percent reduction, according to statistics presented Friday at the first citywide meeting of the NOPD district commanders this year.

The two districts together also saw significant decreases of more than 10 percent in violent crime, which include murders, rapes, robberies and assaults.

“When we came in, from November of 2011 to January 2012, armed robberies were out of control,” said NOPD Second District Commander Paul Noel. “We set that as a goal, and that’s something we’re pretty proud of.”

Police officials attribute the decrease to a number of factors, mostly related to taking more armed robbers off the streets. They made more drug arrests and cleared more CrimeStoppers tips in 2013, and they commonly believe the drug trade and the armed robberies to be connected. Likewise, Sixth District investigators have a 36-percent clearance rate on shootings. And Second District investigators’ robbery clearance rate was 36 percent in 2013, well above the national average.

City officials have said regularly that the major investigations by the new multi-agency gang unit have taken the most dangerous criminals off of New Orleans streets, and many of those gangs were based in the Uptown areas.

“If we start working on the issues that produce the ultimate violent act, we are necessarily working on the other issues as well,” Mayor Mitch Landrieu said in a Jan. 3 news conference.

Like the murder rate, the reduction in Uptown robberies in 2013 raises the bar for the coming year. Armed robberies were reduced to about one every three days across the Uptown area in 2013, but police say they are aware of the need to reduce the number further. These reductions were accomplished with record-low number of officers on the streets, they say, and the 150 new officers planned to be hired this year should help.

The end of the year saw a rash of armed robberies across the city, and Uptown was not spared. The two Uptown districts together recorded nine armed robberies in the ten days between Dec. 31 and last Thursday, the day before the Comstat meeting.

Several of those cases are believed to be the work of a robbery gang hitting citywide, and Uptown investigators played a crucial role in cracking that case, effectively halting the spree, police officials said.

On New Year’s Eve, a couple was robbed outside a restaurant on Soniat Street by a man who fired a gun into the air before taking their possessions, including a phone, police have said. Investigators began tracking the phone, and about two days later had hit on it in the area of Washington and Broad streets in the morning, said Second District Lt. Shaun Ferguson. Only one business at the intersection was open, a nail shop, he said.

“As my detective was walking in the door, he was actually calling the victim’s phone,” Ferguson said. “That’s how we was able to locate who actually had the phone.”

The woman with the stolen phone had several others taken in other robberies around the city, and continued investigation — including a surveillance video from downtown cases — eventually led investigators to identify 24-year-old Michael Davis as the suspect in the Marigny robberies, Ferguson said. Davis did not, however, fit the description of the Soniat Street gunman — who had dreadlocks with gold tips — so he is believed to be a part of a group with other members police are still working to identify, Ferguson said.

Unlike murders, which are investigated by a centralized homicide unit, armed robberies are considered a more localized, neighborhood problem, and are investigated by detectives within each district. In the last spree, however, when the suspects appeared to be striking all over the city, the individual robbery investigators around the city came together to find them, Noel said.

“That’s how we were able to solve these cases — communication across the districts,” Noel said.

In a separate case, Sixth District investigators arrested 25-year-old Joshua Hyman on Sunday in connection with a robbery on Chippewa Street in the Irish Channel. Hyman was spotted by a Sixth District officer at a car wash in the vehicle used in the robbery, and found a gun and drugs in the vehicle as well, said Lt. Frank Young.

Hyman is not believed to be connected to any of the other robberies, but several of the Sixth District cases are thought to involve members of the Michael Davis gang, Young said, and that investigation continues as well.

“We’re on top of the robberies,” Young said at Friday’s meeting.

Only one armed robbery was reported in the Uptown area over the past weekend, according to NOPD crime maps.

Shortly after noon Saturday, a 29-year-old man was in the 4200 block of Cadiz when he was approached from behind by two men, according to the initial report. One had a gun and demanded the victim’s keys, and the two assailants fled in his vehicle with his phone and wallet, the report states.

No additional details were available on the case Monday morning. Anyone with information is urged to call CrimeStoppers at 822-1111.