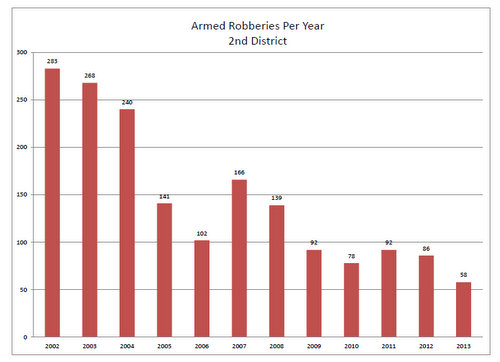 The 58 armed robberies reported in the New Orleans Police Department’s Uptown-based Second District in 2013 is the lowest that number has been in at least 10 years, a dramatic reduction of nearly 80 percent over the last decade, ranking officers said Wednesday in a year-end review of crime statistics.

Back in 2002, 283 armed robberies were reported in the Second District, departmental records show. The number plunged to a low of about 100 after Hurricane Katrina, spiked back up to 166 in 2007 and has steadily fallen since then to 2013’s figure of 58. That represents about one armed robbery per week, said Second District Commander Paul Noel — who said he remembers working seemingly a robbery every day in the Second District as a detective in the early 2000s.

The 58 armed robberies in 2013 also represents a 32-percent drop from 2012, when Noel was made commander of the district and set reducing armed robberies as a top priority. Three factors explain the drop, he told his supervisors in Wednesday’s meeting of ranking officers: a solve rate of 36 percent on armed robberies (above the national average of 24 percent), drug arrests and gun arrests.

“Most armed-robbery perpetrators are involved in the drug trade some kind of way,” Noel said. “If we get the narcotics offenders off the street before they commit an armed robbery, it’s almost like a pre-emptive strike. Violence and narcotics go hand in hand. The more guns we can remove off the streets, even in traffic stops, not only are we working to reduce armed robberies, we can stop shootings and homicides as well.”

The Second District figures outpace the citywide decline in robberies as reported to the FBI. Nearly 2,000 robberies were reported in the city of New Orleans in 2002 — a rate of 410 robberies for every 100,000 residents at the time, according to FBI crime data. That figure had fallen in half in 2012, to 1,065 citywide, according to the most recent FBI reports available.

With the citywide decline in population since 2002, the rate of robberies per 100,000 people fell about 30 percent to 293 in 2012, the FBI reports show. Population figures specific to the Second District were not readily available, but data from the Greater New Orleans Community Data Center shows that the number of households receiving mail in the 70115 and 70118 ZIP codes — which heavily overlap the Second District — are around 98 percent of their June 2005 levels.

The number of officers assigned to the Second District is currently 69 — including Noel and other supervisors, administrative officers, detectives and patrol officers on three shifts — a slight uptick from a low point of 65 officers in 2013 after some returned from injuries. With so few officers on the streets, Noel said he assigns them to patrol the specific streets week-to-week where crime is spiking — similar to comments by U.S. Attorney Kenneth Polite Jr. that “the safety of the Garden District requires safety in Central City” earlier this week.

“Sometimes the best way for me to keep St. Charles Avenue safe is not put the police on St. Charles Avenue, but send the police officers where we’re experience in a crime hotspot,” Noel said. “Not only are we keeping that neighborhood safe by arresting the criminals, we’re working to keep the rest of the district safe.”

Violent crime in the district fell 8 percent overall, largely because of the robbery reduction. Homicides were essentially flat — 19 in 2013 compared to 18 in 2012. Nonfatal shootings fell from 36 to 22, but other forms of aggravated battery (attacks with injuries) rose from 21 to 34. Assaults (attacks or conflicts where threats were made but no one was harmed) rose slightly, from 28 to 31. The only category of violent crime in the Second District to see a major increase was rape, which jumped from 13 in 2012 to 22 in 2013.