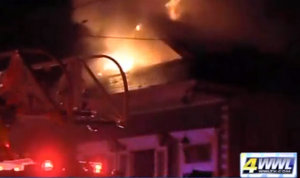 A house burns in a fire in the 2000 block of First Street. (photo via WWL-TV)

The first building to catch fire, a camelback at 2024 First Street, actually fell onto the single-family home at 2026 First, officials said. The cause of the blaze remains under investigation.

For details, see the news release from the New Orleans Fire Department below:

Wednesday, January 8, 2014 at 4:25 am, the New Orleans Fire Department responded to a vacant and blighted property at 2024 First Street. A neighbor, alerted by a dog noticed the home on fire, rushed to awaken residents and called the fire in. Fire companies arrived at 4:31am to find the blighted camel-back home fully engulfed; a second alarm was immediately struck as the fire spread to the adjacent homes located at 2020 First Street and 2026 First Street. As the second alarm companies arrived, the original fire building collapsed and fell onto the home at 2026 First St., prompting a call for a third alarm.

Superintendent McConnell stated that, “Our firefighters did a great job extinguishing the blaze in the freezing temperatures. Taking into account the close proximity of the adjacent structures, this could have been disastrous.”

The New Orleans Police Department, Entergy, Regional Transit Authority and the American Red Cross all assisted with the mitigation of this incident. The cause of the fire is under investigation.