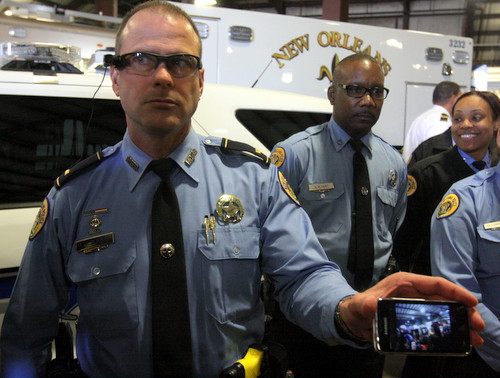 NOPD Lt. Travis St. Pierre demonstrates an extension of the body cameras that can be mounted on a visor or helmet. (Robert Morris, UptownMessenger.com) 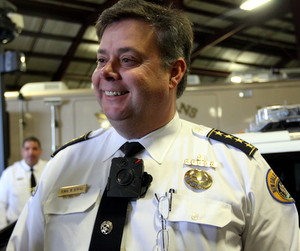 New Orleans Police officials modeled the new cameras Friday that will be part of all on-duty officers’ uniforms this year, as efforts continue to recruit more officers to shore up the ranks of the shrinking police force.

The city has purchased 420 body cameras, enough to be worn by all uniformed officers when they are in the field. The cameras can be placed on a helmet or visor, or directly on the officers’ chests, and are to be turned on whenever the officer is interacting with the public to increase the amount of evidence available and reduce disputes about those interactions, said NOPD Superintendent Ronal Serpas. The video is then downloaded at the end of the shift and stored.

“This is the future of policing,” Serpas said.

Mayor Mitch Landrieu said the cameras will improve the entire interaction between officers and the people they stop.

“If you put a camera on somebody and they know it’s on them, it changes their behavior,” Landrieu said. “It makes them think.”

Serpas and Landrieu unveiled the cameras in a news conference Friday flanked by the same “team” of council members from a similar event about improvements to public recreation on Thursday — Jackie Clarkson, James Gray and Susan Guidry — as well as Cynthia Hedge-Morrell. Guidry, chair of the City Council’s criminal justice committee, said she is encouraged by the reduction in murder and violent crime and the new investments in technology, but in the coming year recruiting new officers should remain a primary goal.

“Our first priority is getting more police on our streets,” Guidry said.

The city has budgeted for five recruit classes of 30 new officers each in order to recruit a total of 150 officers during the year. With the launch of a $300,000 recruiting campaign, the city has already received 360 applications and hired 10 officers for the first recruiting class, Serpas said. Civil service plans at least two testing dates of 40 applicants each in January, and as soon as the remaining 20 officers have been hired for the first class, the academy will begin training them, Serpas said.

Serpas said he didn’t anticipate any difficulty reaching the recruiting goal. In previous years, the department has added as many as 200 officers to its ranks as recently as 2008 and 2009, he said. While the first 30 recruits are being trained, the city will already be seeking the next group.

“We have the capacity to do more than one class at a time,” Serpas said.

Recruiting is a constant challenge, Serpas cautioned. The department actually loses about 100 officers per year, so growing the force will require hiring at a rate substantially above that.

The police department is also adding 100 new vehicles, following 100 added in 2013, and 50 new motorcycles, city officials announced. The equipment was demonstrated by a news conference that also included new breathing devices for the New Orleans Fire Department and new ambulances for the New Orleans Emergency Medical Services, fourth of a series of events Mayor Mitch Landrieu has held in the past two weeks highlighting accomplishments over the past year in murder reduction, retail growth and new recreation services.

With an strong last-minute challenge to re-election from Judge Michael Bagneris, the timing of the press conferences has been questioned. Landrieu obliquely responded to that criticism Friday, saying that he is simply informing New Orleanians about the progress the city is making.

“One of my jobs as the mayor is to report to the people of the city about the work that we have done, based on the instructions that they have given us,” Landrieu said. “…The work that has been done in the last year is admirable, I think it’s measurable, and I think we should take a moment and look at what has been done, but not be anywhere close to satisfied with the level of violence that continues to exist in the city.

“The success of the city is not assured,” Landrieu concluded. “You’ve got to wake up every day and you’ve got to keep at it.” 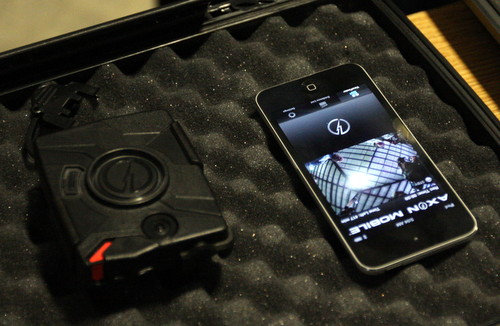 The body camera transmits video to a cell phone in the NOPD Special Operations Division headquarters. 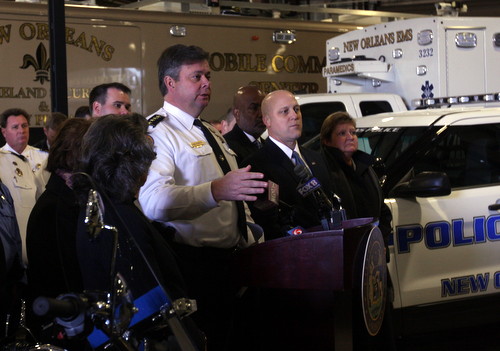