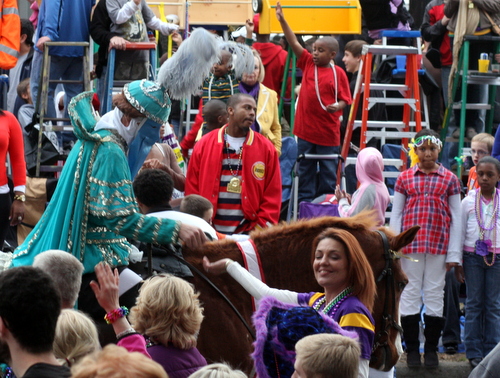 Ladders form a backdrop to the Krewe of Proteus on Napoleon Avenue in 2012. A proposed new law would require all ladders be six feet back from the curb. (UptownMessenger.com file photo by Robert Morris)

All Mardi Gras ladders must be kept at least six feet back from the curb during parades, and may not be chained together, under a set of new laws being introduced this week before the New Orleans City Council.

In addition to being six feet back from the curb, “ladders, chairs, ice chests, chaise lounges, barbecue grills, and other similar personal effects” must be kept out of all intersections, according to the new ordinances being introduced by City Councilwomen LaToya Cantrell and Jackie Clarkson.

Complaints about ladders obstructing the ability of other revelers to enjoy the parades or step back from oncoming floats, and concerns about the fall risk they pose to children, prompted Cantrell to lead discussions about the law over the last year. The current law requires them to be set back as far from the curb as they are tall, but that law has been criticized as difficult to enforce, since it varies from ladder to ladder.

A uniform distance, by contrast, could be easily marked with signs on public property, clarifying the issue for the public, proponents of change have said. In fact, Cantrell had initially considered a 10-foot setback, but neighborhood leaders in September suggested that might be too far to be feasible, especially on the sidewalk side — leading to the six-foot language in the new ordinance.

In a similar issue, no portable toilets can be placed on any public property without written permission from the city, and the toilet companies will be fined $250 for violations — an effort to give the law more teeth, as the toilet renters can be hard to identify during parades, Cantrell has said.

Other new rules being proposed include:

The new laws are on the agenda for Thursday’s meeting of the City Council, which begins at 11 a.m. following other presentations. A vote on the laws will likely be deferred until the Jan. 23 council meeting, however, city officials said.