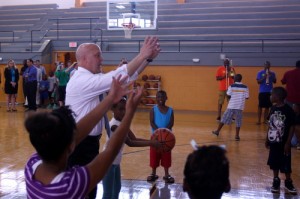 Mayor Mitch Landrieu used the Lyons Center — fully renovated and reopened this past summer after languishing since Hurricane Katrina — as a backdrop Thursday morning for a news conference touting New Orleans’ progress in public recreation in 2013.

The $5 million renovation project improved the pool and the gym, as well as added computer rooms and a dance studio used by the New Orleans Ballet Association. Landrieu recalled that it was in the Lyons Center gym that he “attempted to learn how to play basketball when I was a baby boy” — to which City Councilwoman James Gray reminded him of his own memories sitting in the same bleachers, watching his son on the dominant team from Rosenwald that “tormented” the Lyons Center players and other city teams.

The project broke ground in 2012, and the center held its grand reopening ceremony in June. The mayor noted that it was one of the sites across New Orleans where the Red Cross offered 42,000 hours of swimming lessons this summer.

“It is quite amazing, the work that has been done here,” Landrieu said of the Lyons Center.

Landrieu has been criticized by NAACP President Danatus King — one of his two main rivals for re-election, along with former Judge Michael Bagneris — for an uneven pace of recovery across the city. In Thursday’s news conference, he sought to counter that narrative, naming improvements in 2013 to the Joe Brown playground in New Orleans East, the $5.6 million renovation of the Treme Center, the $612,000 renovation of the Norwood Thompson park in Gert Town, the $1.6 million renovation of the Harrell playground and installation of the Super Bowl turf there, and improvements to the St. Roch playground and Pontchartrain Park. Next year, he said, will bring work on the Stallings Center in St. Claude, a gym in Lakeview and the Sanchez Center in the Lower Ninth Ward.

“Every part of the city has come along in the NORD renovations, so every child in the city has equal opportunity and equal access,” Landrieu said.

In addition to Gray, councilwomen Susan Guidry and Jackie Clarkson both joined Landrieu at the Lyons Center on Thursday. Clarkson promised that the NORD improvements would soon be coming to Algiers, and Guidry praised the city’s work in District A.

“I don’t think we could have asked for anything to go any faster or any better than it has gone,” Guidry said.