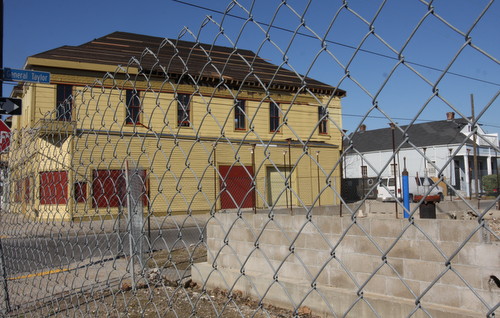 The site of the former Martin Wine Cellar on Baronne Street is still surrounded by chain-link fence, but the new roof on the old New Orleans Bicycle Club building can be seen behind it. (Robert Morris, UptownMessenger.com)

Although the site of the former Martin Wine Cellar on Baronne Street remains a quiet concrete foundation, neighbors have been cheered by the sounds of construction at the old New Orleans Bicycle Club building next door, and owner Cedric Martin says rebuilding his beloved grocery remains on track to begin in March and finish six months later.

“We are on the fast track,” Martin told the Delachaise Neighborhood Association on Tuesday night, to applause. “If it goes all by the plan, we will be open Sept. 15.”

Martin said that he will have received all the bids from the contractors by February, and that financing for the rebuilding project has already been pre-approved. He does not expect difficulty from the city in securing the permits, because he went through that process in 2010 prior to the start of construction then (which was halted soon afterward, he has said, amid discussions with Entergy about placement of the power lines). The redesign of the building since that time did not change the footprint, but only lowered the height of the building, Martin said.

“It’s been a long process, and you’re as frustrated as I am,” Martin said. “I don’t think there’s going to be any hold up.”

The Wine Cellar, a New Orleans icon for nearly six decades prior to Hurricane Katrina, still enjoys a strong sentimental attachment among neighbors eager to see it rebuilt. Martin has the strong support of the neighborhood, who still regard him as a friend as much as a businessman, said association member Will Winebrenner.

“We’re looking forward to seeing progress on March 15 — it’s the small step of seeing construction work being done,” Winebrenner said. “I see progress being made on his properties, so I can’t help but feel the gears are grinding and he can actually pull this off.”

The Wine Cellar will anchor the commercial corridor on that section of Baronne Street, which already features the celebrated Cleaver Meat Company, said Evelyn Gaubert. Residents long to be able to walk down to the store again for groceries or sandwiches, Gaubert said.

“I look forward to it being open. It’s way overdue — I’m sick of looking at concrete blocks with nothing on it,” Gaubert said. “I think it will enhance the neighborhood tremendously.”

The association members also asked about the status of the old New Orleans Bicycle Club building, which dates back to the 1800s, according to the Preservation Resource Center. Martin has been renovating the building over the last year, restoring a roof and a third floor that had severely deteriorated.

The long-term idea for the Bicycle Club building, Martin said, is for an event space with some sort of kitchen facility. But that project will come after the Wine Cellar is rebuilt — for now, the goal with the Bicycle Club is to restore the building so that the deterioration stops.

“This is down the road,” Martin said. “I’m putting everything into the store.”

At the Bicycle Club construction site Wednesday morning, worker and neighborhood resident Gerard Jagers said he was proud of the renovations to the building so far. The upper levels were so deteriorated, he said, that the workers had to rebuild the third floor before they could even start on the roof.

“He wanted the building to look good for the neighborhood,” Jagers said. “You can see the roof from Louisiana Avenue.”

As Martin’s presentation ended, members of the Delachaise Neighborhood Association asked if there was anything they could do to help.

“If you go to church or synagogue or anything, just pray,” Martin said. “I don’t see any hiccups in this, but of course you don’t know until something happens.” 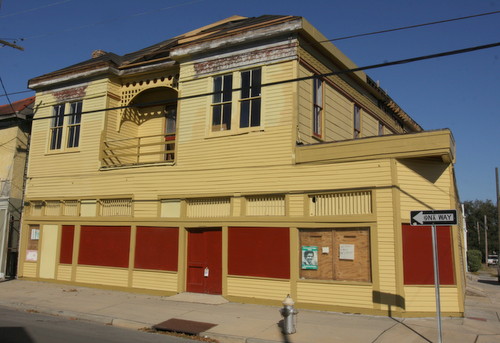