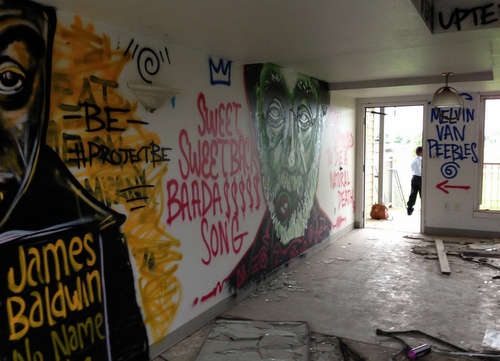 (photo by jewel bush for UptownMessenger.com)

It’s 34 degrees at daybreak; and the temperature is rapidly dropping. The day is as dreary as it is gray, but not even the hawk — or the Housing Authority of New Orleans (HANO) — can keep Brandan “BMike” Odums away from the Florida Projects.

He’s not breaking and entering in the name of creation this time around. The visual artist, who is equally dexterous with spray paint as he is with acrylic and pen and ink, is there to reflect on #ProjectBe, an organic participatory art odyssey that began last summer. #ProjectBe sparked debates among the arties — and authorities – about what makes “legitimate” art and whether a weather-beaten public housing development can ever be more than an underground thrill.

The Florida, located in the Upper Ninth Ward, has languished since Hurricane Katrina hit in 2005. New construction is currently underway on a tract of land in the shadows of the old housing development. In a few month’s time, Odums turned the Florida’s 17 or so crumbling townhouses into mini art galleries. However, you can no longer view the rooms that Odums used as his personal studios spray-painting love letters to revolutionary figures like prison abolitionist Angela Davis, politically charged poet Gil Scott-Heron, the pretty dancer, Muhammad Ali and the radical New York City artist Jean-Michel Basquiat who turned a graffiti tag into mega stardom.

After scores of creatives began to join Odums contributing their expressions to the decaying buildings and the sightseers began to flood the Florida, HANO shut down the whole thing, citing entrance into the dilapidated structures as a liability and ultimately trespassing. Metal coverings were placed over the doors and windows of the individual units.

Two outdoor pieces – murals of Frederick Douglass and Chuck D of the trailblazing group, Public Enemy – remain visible, while the images of Martin Luther King Jr., Huey P. Newton, the Incredible Hulk and John Coltrane are among others trapped inside. 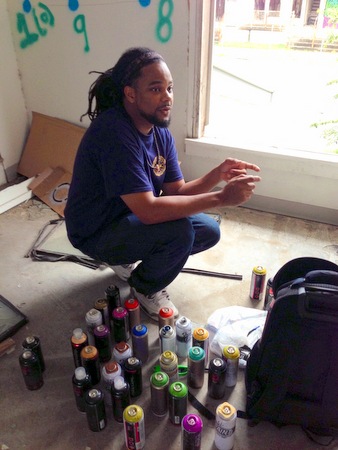 (photo by jewel bush for UptownMessenger.com)

“Malcolm X (mural) is in that room, and the iron is covering it. It’s like prison bars,” said the 27-year-old art activist. “This place was full of potential. Seeing it escalate and the people participate in it and it become this living space. Now going back, it’s depressing. It feels like all the rooms are shackled, and the buildings are gagged.”

This is one of Odums’ first treks back to #ProjectBe in months. Photographer and filmmaker Patrick Melon is interviewing Odums on site as he puts the finishing touches on his documentary, “Strong Light,” to be released next month, which chronicles the rise and shuttering of #ProjectBe.

Post-#ProjectBe, the New Orleans community has learned that the city is hungry for a large-scale participatory project, a collective healing of sorts from the normalized mayhem that is everyday life here; a way to cope with the pain of the shootings, the soaring rents and the fragmented educational system. Everyone from the elementary school teacher to the occasional museum-goer to the whoadie made pilgrimages to the ruins to add their mark to #ProjectBe, a confluence Odums describes as “artistic alchemy.”

#ProjectBe didn’t die with its closing early fall. The project caught a fire due to media attention and the momentum propelled Odums to wider audiences. He was tapped by TED to do a #ProjectBe talk as well as to work with Basquiat collaborator Al Diaz at the Basquiat Festival put on by the International Hotel to honor his one and only trip to the Crescent City in 1988.

Drawing many parallels from the rise of Basquiat from the street art scene to Andy Warhol’s pop art universe, Odums’ #ProjectBe challenged the automatic dismissal of graffiti art from serious conversations about art while redefining the definition of art and renegotiating the boundaries of where one can view said art.

Who makes art? Who gives art permission to be art? are questions Odums continues to grapple with.

“Whether it was ‘The Room of She,’ or the poets, everyone who stepped foot on #ProjectBe came correct and created something that was important to them,” said Odums, sharing that many of those who joined him at #ProjectBe were strangers who heard about it via the Instagram hash tag.

#ProjectBe was – is – an altar, a shrine to the everyday political that we live with and often overlook. The very act of being black in America is political — from how our ancestors arrived, to where they could use the bathroom and drink water and live and work and shop and walk, drive, ride and go to school. Your wages, your healthcare, your thought processes are all political. If you are black in America (breathing or otherwise), you have been politicized.

“If someone were to ask me what happiness looked like in 2013, I would say a bag full of paint walking through those projects and finding a blank wall and painting until the sun goes down,” Odums said.

Odums is currently in talks with HANO on how to preserve the work of #ProjectBe.

9 thoughts on “jewel bush: The return to #ProjectBe”