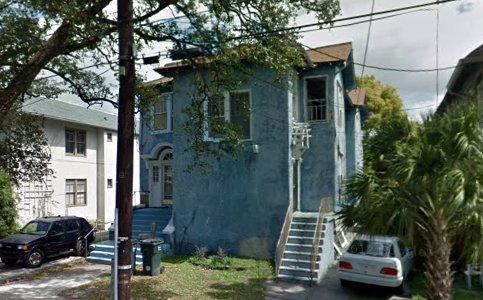 The profitably-departed house formerly at 2509 Napoleon. (via Google maps)

Happy new year, all!  If recent real estate activity in the New Orleans metro area keeps pace with present trends, 2014 should prove even more interesting than maybe any one might imagine.  But not to get too ahead of the proverbial realty crystal ball, let’s look at a flip that took place in the last six weeks at 2509 Napoleon.  I’ve written in the past about other nearby flips, including one next door at 2505 Napoleon, but make sure you are sitting down if you continue to read on about 2509.  Seriously, you won’t believe me.  And for clarity/disclosure, I did not participate in any part in any of these sales; effectively, I am only an observer.

Land ho!  A little over a year ago 2509 Napoleon was a shipwreck of a duplex; Google map it here.  While the panoramic view doesn’t quite convey the dilapidation (believe me, it was messy), the dwelling needed a whole lot and then some to be brought into the 21st century proper.  All the same, personally I saw a great old house that I felt could be brought back, but the saggy, old blue behemoth that she was, others, including the purchaser, decided demo was the way to go.  So some time after a sale of $80k cash on 11/2/12, the duplex disappeared and voila another vacant lot appeared Uptown.

But not just any vacant lot, mind you.  Green space on an improving avenue steps to a revitalized commercial corridor in one direction and state of the art medical care in the other.  And size too: 60 feet wide by 120 feet deep.  That’s beaucoup feet and a lot of lot.  In short, this newly cleared spot had more pros than cons, and on 10/17/13, less than a year from the sale of the duplex, lists for an eyebrow raising $199,000.  Laughing out loud yet?  Sound outlandish enough for you?  Best part is — which is the point of this piece — it sells.  After a price reduction a few weeks later to $179,000, a contract takes place and cash sale shortly thereafter on 12/5/13 for an impressive $164,000.  That’s right: more than twice the money from a year before, then with a structure on it.

Them’s Lakeview prices.  I mean, Uptown is Uptown, but holy frijoles, the sea change here staggers.  Words like pivotal come to mind.  Paramount.  Gamechanger.  Whatever your plussed descriptive preference may be.  Land value as reflected in sales in Lakeview and Old Metairie has been steadily rising over the years, and the vacant land inventory along the sliver by the river has a measurable history of improving desirability too.  Other parts of Uptown?  Well, the giant has been asleep.  And now it appears awake.  And it’s hungry.

What will become of 2509 Napoleon next?  Let’s watch and see.  The better question becomes how exactly will this sale impact our market?  According to record it sold for cash, meaning no appraisal was required; maybe one happened, but likely one didn’t.  But the biggest question may be how might this affect 2015 property taxes for the immediate area?  2014 property taxes are not only set now but due by the end of January 2014.  Time will tell there.

Permit me to close on a cautionary note of prospecting paired with preservation.  A genuine fear, at least for me, here is the investing market may seek returns on land that presently possesses salvageable dwellings.  I am all about making a profit and feeding one’s family, but I am also all about preserving our past.  Maybe 2509 Napoleon was not salvageable, but maybe it was too.  And maybe it was historic, though it likely wasn’t.  On the whole the preservation community in New Orleans does a very thorough job of watchdogging our history, and may that remain so in 2014.

4 thoughts on “Jean-Paul Villere: The art of the flip, Act III (“Less is more”)”