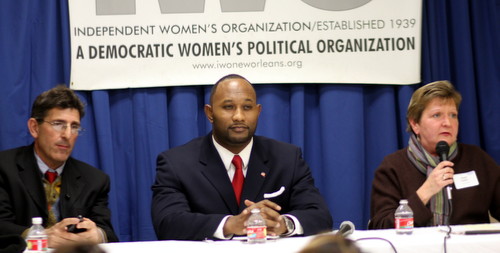 Violent crime in neighborhoods, economic development and opportunity, balancing the city budget and even gay marriage and marijuana legalization were all discussed Tuesday night by Democratic candidates in the New Orleans city elections, many appearing on the same stage for the first time a mere three weeks before the Feb. 1 election day.

The pace was brisk and the tone was mostly — though not always — genial as the Independent Women’s Organization asked a handful of questions to more than two dozen Democratic candidates for mayor, City Council and other citywide offices.

City Council District A
For the District A City Council seat (which runs from the university area of Uptown through Carrollton, Mid-City, Bayou St. John and Lakeview), incumbent Susan Guidry was joined on stage by two other Democrats, Jason Coleman of Coleman Cab Company and attorney David Capasso. Drew Ward, a Republican from Carrollton, and Stephen Foster, an independent, did not participate.

Capasso, a labor and civil-rights attorney, said he felt called to run by the need for living wages in New Orleans, including the city employees who make minimum wage. Companies make vague promises to hire locals, women and minorities that they do not keep, he said.

“There are thousands of people who work for the city … they’re not being respected,” Capasso said. “They’re not at the table.”

Coleman said his top issue is violent crime, citing attacks on working citizens such as man with a pipe stealing from a Carrollton Avenue employee after Christmas to a deadly armored-car robbery at a Carrollton bank. Meanwhile, he has been helping connect neighbors in Carrollton to police officials in an effort to fight drug dealers.

“I don’t want to see another bullet in my house. I am terrified to go to the store and get held up,” Coleman said. “But if you solve economics, you solve it all.”

Guidry cited her work on the criminal-justice committee, bringing unprecedented public scrutiny to law-enforcement budgets and making changes to focus a shrinking police force on violent crime, allowing them to issue court dates for minor infractions such as marijuana possession instead of making time-consuming arrests. Now, she said, she is “cautiously optimistic” about the success of those efforts.

“The recovery of this city was something I was compelled to be a part of and I am compelled to continue it,” Guidry said.

Capasso and Coleman both avoided criticizing Guidry directly, though they sought to draw distinctions between themselves.

Coleman said he would watch out for residents’ pocketbooks, noting that the city’s new taxicab regulations have hurt the drivers, mandating costly new standards without allowing any new revenue streams for them. And when asked what would be the top three challenges of the next four years, Coleman said, “the same three challenges from four years ago and probably four years before that,” citing lack of progress on a community center in the Carrollton neighborhood where many children go hungry.

“They’re lucky to get a hot meal,” Coleman said.

Capasso said he is frustrated by the “arrogance” of some public officials in City Hall, and would do more to criticize others like Gov. Bobby Jindal who he said is working against New Orleans. He also suggested that progressive reforms could benefit the city economy.

“Why can’t we have a city that has gay marriage, and we can make money off that? They made a $1 million in Denver yesterday on marijuana,” Capasso said, to loud laughter and applause.

But Guidry, striking a note similar to other incumbents, said the city is much better off than it was four years ago, and pledged to continue working on its behalf. She mentioned new jobs at the Costco and in District’s growing commercial corridors, from Magazine Street to Oak to Harrison.

“I believe that I have shown in District A some real successes in our recovery and, as the mayor says, growing it better, making the city better,” Guidry said. “It’s important to me to keep this work going.”

At-Large races
The forum also provided a glimpse into the dynamics of the two citywide seats on the Council. 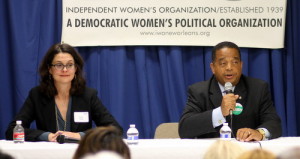 In contrast to the District A race, the discussion about the contest for the Division 1 At-Large seat between Stacy Head and Eugene Green was more confrontational, with Green directly criticizing Head from the first question. Green said Head has been ineffective in promoting growth in the city’s poorer neighborhoods, and argued for more direct investment, such as the redevelopment of the Priestly building in the Carrollton neighborhood.

“I see too many pockets of poverty remaining in our city, too many communities where we haven’t invested resources,” Green said. “… The boy who grows up at the corner of Florida Avenue and Louisa has as much right to live without blight and to live with opportunity as someone who grows up in other areas of the city.”

Head said she has two primary missions on the City Council, she said — to address the practical, day-to-day needs of constituents, and to fix the larger systems that are broken in City Hall. She said the best economic development is quality of life, and said she has focused on funding programs that have been effective versus those that have wasted the city’s money. 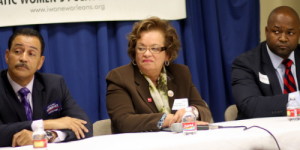 In Division 2, the challenge may not have been as personal, but the contrast between the three candidates was nearly as clear. District D Councilwoman Cynthia Hedge-Morrell, like the other incumbents, described the work of the last four years as crucial to the city’s survival.

“What I am offering is experience, continuity and service,” Hedge-Morrell said. “There is much we have to be proud of. … What I am most proud of is where the city has come from Katrina.”

Jason Williams, a successful defense attorney, countered that he is worried about the city his 7-year-old son will inherit in a decade.

“I’m not proud of the record we’ve made here in the city,” Williams said. “I cannot trust the city of New Orleans as it looks right now with him, and that scares the life out of me.”

Freddie Charbonnet, an attorney who was previously appointed the interim council member for District E, positioned himself as knowledgeable about City Hall and the issues facing the city, but still independent and coming from outside the system, positioned between Williams and Hedge-Morrell.

“On one hand, I’m not a career politician,” Charbonnet said. “On the other hand, I’m no stranger to city government.”

Citywide races
In addition to the other contested Council races (C, D and E), the 200 people packing the union hall also heard from the three Democratic candidates vying for mayor, the three running for sheriff and the three running for coroner. (Independent candidates for mayor and sheriff were not included.) Clerk of Court Arthur Morrell spoke briefly — without challenger Robbie Keen, an independent — as did assessor Errol Williams, who is unopposed.