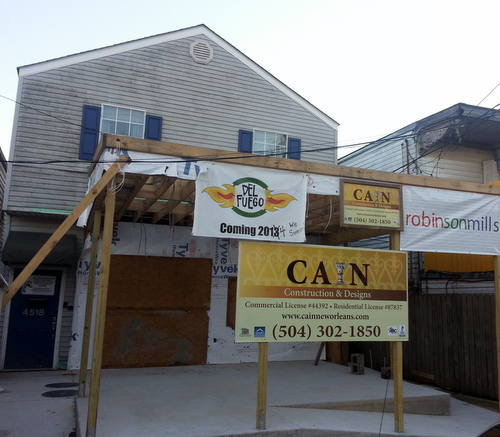 The sign outside the future home of Del Fuego Tacqueria reads “Coming in 2014 – We swear!” (Robert Morris, UptownMessenger.com) 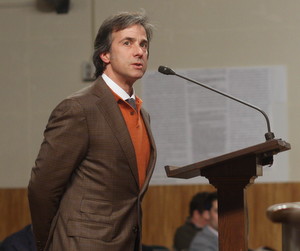 A new Mexican restaurant on Magazine Street planned by a former Commander’s Palace chef received initial approval from the City Planning Commission on Tuesday, as did a new reception hall in the Lower Garden District by Joel Dondis of La Petite Grocery.

David Wright, who has cooked in New Orleans kitchens including Commander’s Palace and Jacque Imo’s for 15 years, had hoped to open Del Fuego Tacqueria at 4518 Magazine in time for Mardi Gras, but construction delays mean it may be later in March, he said.

A native of California, Wright said he has a strong love for Mexican food, but wants to tap into some of the country’s flavors that New Orleans may not currently have. Del Fuego will offer the usual assortment of tacos and burritos with cilantro and jalapenos, Wright said, but “we want to push it a little farther than that.”

He had originally conceived of Del Fuego as a counter-service restaurant, he said, but his 20 years in fine dining finally pushed him to more of a sit-down restaurant. It will still be casual, however: “No jackets required,” he said, laughing.

Wright appeared before the City Planning Commission on Tuesday asking for permission to sell alcohol at the restaurant. Like the food, the traditional cold Mexican beer and margaritas will be paired with more ambitious drinks influenced by Mexico, using fresh-squeezed fruit juices and an array of tequilas and mezcals.

Only one other person spoke at the meeting — nearby resident Jonathan Shaver, who supported the request and said he and his neighbors look forward to it opening. The commission quickly approved the request.

The decision still needs final City Council approval, and Wright said he doesn’t know how long it will take to get the license. If the process takes several months, he may open without it, but he’ll time the opening with the liquor license if at all possible.

“Mexican food is one of those cuisines you just think of pairing with alcohol,” Wright said. “Obviously, we’d prefer to open with it, so you can have the complete experience the first time you come in.”

Also on the City Planning Commission docket on Tuesday was the Il Mercato reception hall redevelopment from Joel Dondis — founder of Sucre, La Petite Grocery and Grand Isle — at 1911 Magazine Street in the Lower Garden District.

The building was constructed as a market by the Works Progress Administration in 1931, but has been closed for years, and Dondis plans to renovate it for use as a reception hall. Most of the food will be prepared at his catering facilities off-site, he said Tuesday, and all parking will be provided by valet to a lot about two blocks away.

The project has enjoyed the support of the Coliseum Square Association since last spring, but a group of four residents of the 1100 block of St. Mary Street appeared Tuesday saying they had been left out of public meetings on it up to this point. They were concerned, they said, that the cooling and ventilation systems on the roof will be too loud near their homes, that an exterior wall will block the view of the historic building, and that guests and delivery trucks will overburden the neighborhood parking situation.

“It is already a challenge to park in this high-density area,” said St. Mary Street resident Chris Rogers.

Dondis apologized to the neighbors who didn’t receive notice of meetings he has held about the project, saying that their addresses must not have been on a list of neighbors provided by the city. He would be willing to agree to a screen on the climate-control and venting systems, and reiterated that valet parking is a crucial element of making the project work, both for his guests and for the neighborhood.

The City Planning Commission passed a recommendation in favor of Dondis’ project with little discussion, and Dondis spent quite some time after the meeting privately discussing the project with the residents who had opposed it. 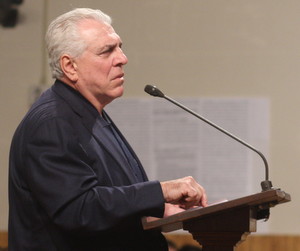 Also on Tuesday, the commission split a vote on a proposed expansion of Champ’s Collision Center on Carrollton into the former Pelican Thrift building on a technicality, telling owner Ronnie Lamarque that they didn’t receive his building plans in time to review them. City Councilwoman Susan Guidry’s office will have time to evaluate the plans, they said, and the decision will fall to the council anyway.

The commission also approved some technical changes to the conditions attached to the Magnolia Marketplace shopping center on South Claiborne to reflect the fact that a parking structure is no longer planned at the site.