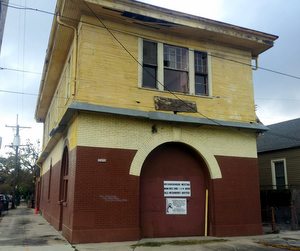 The proposal to create a coffee house called “Engine 37” in the former Laurel Street fire station near Wisner Park won unanimous approval Thursday from the New Orleans City Council, whose members cited the support for it among neighbors and the benefits it will bring to the area.

Sylvi Beaumont and her husband bought the former fire station from the city in a surplus property auction in May, and are proposing a coffee shop with a few apartments adjacent to it. Though the building’s zoning is residential, it has never been used as a residence, she noted, but as a coffeehouse will be an amenity to the nearby park.

The City Planning Commission had previously voted to recommend denial of the rezoning, saying that because it had never been a strictly commercial building in the past it should not now become one. They noted that its institutional use was close to commercial, however, and said the decision was one they struggled with.

At Thursday’s City Council meeting, a handful of neighbors spoke in opposition to the project, and only one showed up in support for it. One nearby resident, Bob Ferris, told the Council that there is no need for the rezoning — there are hundreds of businesses on Magazine Street, including some empty storefronts, and if the neighborhood truly needs a new coffee shop, a new one will open on Magazine.

“The right thing is to preserve our precious residential neighborhoods,” Ferris said. “We have coffee shops. We don’t need businesses encroaching on our neighborhood.”

Beaumont said she held a neighborhood meeting on Monday, however, and that three-fourths of the 46 people there voiced their support for it. City Councilwoman LaToya Cantrell said she was impressed by the support at that meeting as well, that the Beaumonts’ son will live in one of the apartments, and that the business will participate in the crime-camera initiative around Wisner Park.

For those reasons, Cantrell offered the following path forward: give the zoning a positive vote from the City Council so the deadline for action would not expire, but hold the technical adoption of the ordinance until a good-neighbor agreement can be worked out with the Friends of Wisner Park group nearby.

City Councilwoman Stacy Head, who previously represented the area before her election to the citywide at-large seat, said she lives in a similar neighborhood, mostly residential with a mix of small businesses. That arrangement improves quality of life for residents, creating a “live-work” concept similar to what was proposed by urban theorist Jane Jacobs, Head said.

“I certainly understand the fears of change,” Head says. “But I do believe your council member has done everything possible to reduce those. … We can’t be handcuffed by fear.”

Council members Jackie Clarkson and Kristin Gisleson Palmer joined in the praise for the project, talking about what a benefit it will be for the neighborhood. With that, the council voted 7-0 in favor of the rezoning.

After the vote, Beaumont said she hopes to negotiate the good-neighbor agreement within a few weeks, and would like to begin cleanup of the property in preparation for construction in January. The actual renovation could take a year or more, she said. In the meantime, she said she appreciated Cantrell’s decision.