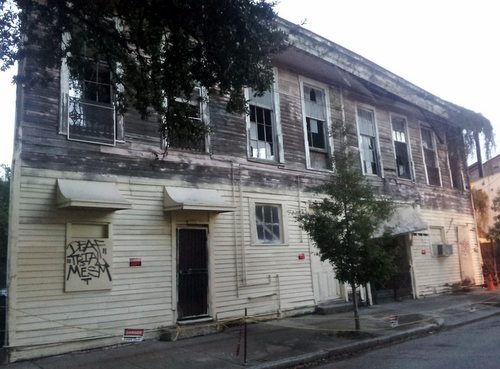 The latest request to demolish the First Spanish-American Baptist Church building in the Lower Garden District — listed in 2011 as one of the most endangered historic structures in New Orleans — was denied with more stern words from city officials Thursday, but the fate of the structure remains uncertain as it continues to decay.

The building at 1824 Sophie Wright Place is already open to the elements, but it has lost more of its outside walls since the last inspection, and an outside staircase has come unattached from the building and is leaning away, said Rhonda Lange of Demo Diva, representing the church.

“You honestly just have two walls standing with no support,” Lange said.

The Historic District Landmarks Commission noted that the building has been before them several times in progressing states of neglect over the last 10 years. The Louisiana Landmarks Society placed the 19th-Century building on their 2011 list of New Orleans’ Nine Most Endangered Sites.

“Once a bakery, it is one of the few of its kind that abuts the property line at the street. Its position at the entrance to the business corridor of Magazine Street highlights its blighted condition,” the Society wrote. “Through the Coliseum Square Association, the surrounding neighborhood fought blight for forty years to become an evocative neighborhood with one of the few large working fountains in the city. The city has yet to act on the owner’s negligence.”

Jim McAlister, president of the Coliseum Square Association, said that through the church’s inaction, they are trying to let the elements accomplish what the city has prevented them from doing — tearing down the structure. The association launched a mail campaign to drum up support for preserving the building before this hearing, and the HDLC members were given a thick stack of postcards from their efforts during the meeting.

Bonnie Slaughter, another neighborhood resident, said she had hoped the building’s inclusion on the New Orleans’ Nine would spur redevelopment back in 2011.

“Since that time I’ve been very disappointed,” Slaughter said. “It looks sadder and sadder.”

The harshest words for the church, however, came from the commissioners. HDLC Chair Jesse LeBlanc said he is personally aware of an architect in the neighborhood who tried to buy the building, only to be rejected by the church. The building’s structure is clearly unsound, he said, but numerous people have expressed the opinion it could be saved.

“If the church doesn’t have the money to do it, why not sell the building?” LeBlanc asked.

The commissioners unanimously voted to deny the request to tear down the building, citing it as an example of a citywide problem.

“This is a common tactic that some slumlords do,” said Commissioner Alonzo Knox, saying the property should be sped to sheriff’s sale amid its mounting code-enforcement fines.

“If we approve this, it’s almost like rewarding them for violations,” said Commissioner Stephen Peychaud. 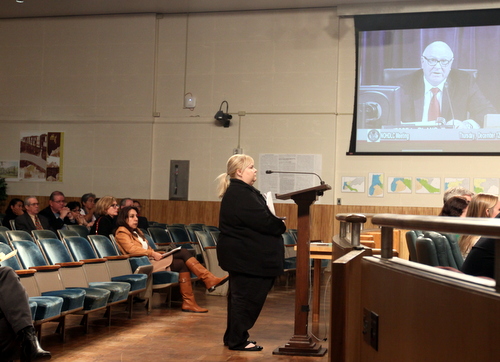 Rhonda Lange of Demo Diva speaks before the Historic District Landmarks Commission on Thursday, with members of the First Spanish-American Baptist Church in the background. (Robert Morris, UptownMessenger.com)

The commission also denied a request by the Recovery School District to replace wood windows at the International School of Louisiana building on Camp Street with aluminum windows, and deferred a request by Trinity Episcopal Church to replace a window with a new door on Bishop Polk Hall. To read our live coverage of Thursday’s meeting, see below.