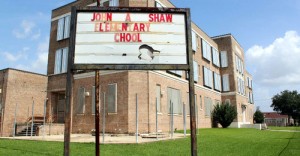 ENCORE Academy has begun receiving applications for the next school year, as officials say their ambitious plan to renovate and move into a new building in the St. Roch neighborhood remains on track.

In September, the Orleans Parish School Board accepted ENCORE’s bid of $130,000 for the former John A. Shaw Elementary School building on Arts Street in St. Roch, and number of simultaneous efforts are underway with respect to renovating it, said school leader Terri L. Smith on Tuesday at the board’s December monthly meeting. The school is finalizing the sale with the Orleans Parish School Board, choosing a local architect and choosing a contractor for the renovations — all with the assistance of Karl Jentoft of the school-facilities consulting firm TenSquare, Smith said.

Jentoft will be in New Orleans in January to meet with the board and with parents about the move, Smith said. Construction is slated to begin in late February or early March, and should be finished in time for the school to begin on time in early August, Smith said.

Last year, TenSquare delivered all of its projects on time, Smith noted.

Pastor Fred Luter of Franklin Avenue Baptist Church toured ENCORE Academy for the first time this week, and the congregation at the church is excited that ENCORE is moving to Arts Street, Smith said. They were very supportive of the Shaw school in years past, Smith said.

“We’re getting other stakeholders in the new community on board,” Smith said.

One point undecided upon is the fate of a small caretaker’s cottage on the property. The school already plans a separate performing arts building on campus, but the caretaker’s cottage is in poor condition, and officials have not decided whether to try to save it, Smith said.

Meanwhile, the school has begun receiving applications through the citywide OneApp enrollment system. Preliminary figures shared with the board Tuesday show that 68 students have applied for ENCORE so far, with 13 indicating it as their first choice, 13 making it their second choice and 16 calling it their third choice.

The admission process “gets into full gear” in January, Smith said, so more data will be forthcoming.

Last year, the school’s students in grade 3 or above received state testing for the first time, resulting in a school performance score of 64.9, which the state deems a ‘D.’ The school is already outperforming other schools with similar populations that have been in operation much longer, Smith said, and is only a few points shy of the 70 needed for a ‘C.’

The school is now gathering data from mid-year testing to see which students will need individual remediation prior to the coming year’s tests.