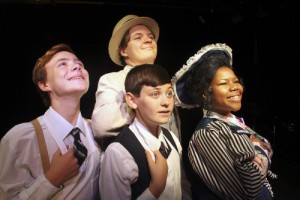 Lusher Charter School’s rendition of “Hello, Dolly” from this weekend’s production of the musical won the school a $10,000 first-place prize to enhance the school music program in Popeye’s “Love that Music” contest, the school has announced.

More than 100 elementary, middle and high school students are performing Thursday, Friday and Saturday in Lusher’s production of “Hello Dolly” on the stage at Dixon Hall at Tulane University. For details, see the news release from the school below:

“Hello Dolly!” is a multi Tony award-winning musical that first opened on Broadway in 1964. It became the longest running musical of its time. The story concerns a turn-of-the-century widowed matchmaker, Dolly Gallagher Levi, who, after cunningly negotiating marriages for others through a series of comic romantic entanglements, ultimately finds her own match. “Hello, Dolly!” is a magical piece of musical theatre filled with memorable songs such as ‘Put On Your Sunday Clothes,’ ‘Before the Parade Passes By’ and ‘It Only Takes A Moment.’ Show stopping dance numbers like ‘Dancing’ and ‘The Waiter’s Gallop’ are combined with beautiful turn-of-the-century costumes to create a musical the whole family will enjoy.

“Hello, Dolly!” has been delighting audiences for years and Lusher High School’s production will be sure to entertain audiences of all ages. Lusher invites all to attend!